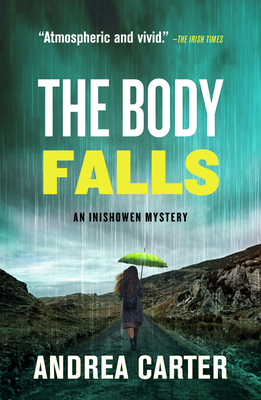 This is book number 5 in the An Inishowen Mystery series.

April in Florida and Benedicta (Ben) O’Keeffe is enjoying balmy temperatures during the last few days of a six month stint with a U.S. law firm. A week later, she returns to Glendara, Inishowen, where a charity cycle event is taking place. The town is abuzz with excitement, but it starts to rain, causing the cyclists to postpone the start of their event and stay overnight in the town. The rain doesn’t stop—it becomes relentless, torrential.

In the middle of the night, Police Sergeant Tom Molloy is called out to Mamore Gap, where a body, dislodged from a high bank by the heavy rain, has fallen onto a passing vehicle. It is identified as Bob Jameson, a well-known charities boss and the organizer of the cycling event. Stunned, the local doctor finds evidence of a recent snakebite. Terrible weather persists and soon bridges are down and roads are impassable. Glendara is completely cut off and since there are no native snakes in Ireland, could there be a killer trapped in the community? With no help from the outside world, it’s left to Molloy—with Ben’s assistance—to find out who is responsible for Bob Jameson’s bizarre death.

While all of the novels in the Inishowen Mystery Series stand on their own and can be read in any order, the publication sequence is:

Andrea Carter grew up in the midlands of Ireland, studied law at Trinity College Dublin, and worked as a solicitor on the Inishowen Peninsula, County Donegal, where she ran the most northerly solicitor’s practice in the country. Following that, she moved to Dublin to practice as a barrister before turning to write crime novels. She holds an MFA in Creative Writing from University College Dublin.

The Body Falls is the fifth in the Inishowen Mystery Series. Carter’s first book, Death at Whitewater Church, a winner of the Irish Writers Centre Novel Fair, was followed by Treacherous Strand, The Well of Ice, and Murder at Greysbridge. She has been the recipient of two Arts Council of Ireland Literature Bursary Awards and a Dublin City Council Bursary Award. The series is being adapted for a television crime series to be titled “Donegal—The Inishowen Mysteries”. Andrea Carter lives in Dublin with her husband, documentary maker Geoff Power.

Praise for the Inishowen Mystery Series

“Carter keeps the suspense high en route to the exciting climax. Fans of Gerald Elias’s Daniel Jacobus series will want to check this out.” —Publishers Weekly

“The weather, as an additional character in the plot, is very effective. Though part of a series, this book can be read as a stand-alone. Recommended for fans of Carlene O’Connor and the “County Cork” series by Sheila Connolly.” —Library Journal

“Combining elements of the locked-room mystery with those of a village cozy, Carter offers a tale that is both charming and surprisingly complex.” —Booklist

“A phrase written for the [Inishowen Mystery] series debut begs revisiting: What starts as a metaphoric soothing tea, served in exquisite porcelain, ends with the kick of a brandy-laced double espresso." —Bookreporter

“[Murder at Greysbridge] is truly a perfect choice for fans of character-driven mysteries set in thrilling surroundings . . . It has everything a reader could possibly want in a stellar piece of writing. Agatha Christie would be proud.” —Suspense Magazine

“[The Well of Ice is] another riveting suspense thriller of a mystery from an accomplished master of the genre.” —Midwest Book Review