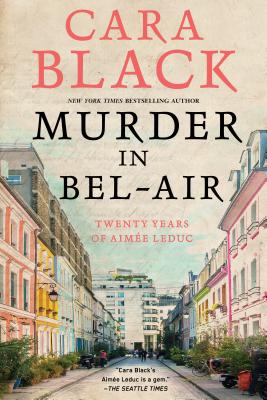 This is book number 19 in the An Aimée Leduc Investigation series.

Parisian private investigator Aimée Leduc is about to go onstage to deliver the keynote address at a tech conference that is sure to secure Leduc Detective some much-needed business contracts when she gets an emergency phone call from her daughter’s playgroup: Aimée’s own mother, who was supposed to pick Chloe up, never showed. Abandoning her hard-won speaking gig, Aimée rushes to get Chloe, annoyed that her mother has let her down yet again.

But as Aimée and Chloe are leaving the playground, Aimée witnesses the body of a homeless woman being wheeled away from the neighboring convent, where nuns run a soup kitchen. The last person anyone saw the dead woman talking to was Aimée’s mother, who has vanished. Trying to figure out what happened to Sydney Leduc, Aimée tracks down the dead woman’s possessions, which include a huge amount of cash. What did Sydney stumble into? Is she in trouble?

Cara Black is the author of nineteen books in the New York Times bestselling Aimée Leduc series. She has received multiple nominations for the Anthony and Macavity Awards, and her books have been translated into German, Norwegian, Japanese, French, Spanish, Italian, and Hebrew. She lives in San Francisco with her husband and son and visits Paris frequently.

Praise for Murder in Bel-Air

“Rich in Parisian settings and vernacular, Murder in Bel-Air is easily accessible and enjoyable to new and long-time readers alike.”
—BookPage

“As always, the characters are smartly drawn, the plotting is complex but believable, and the Parisian setting is both charming and, at times, deadly. This is a fine continuation of an ongoing family drama, mixed together with international intrigue.”
—Deadly Pleasures Magazine

“One of her best . . . Whether read as a crime story with roots in international politics or as the latest chapter in a fascinating family drama, this is a deeply satisfying and entertaining novel.”
—Booklist, Starred Review

Praise for Murder on the Left Bank

“Even after 17 books, Ms. Black has intriguing corners of Paris to reveal—from an enclave of ateliers once home to the likes of Gauguin and Rodin to a crime-ridden neighborhood where ‘no one wanted to be witnessed witnessing.’”
—The Wall Street Journal

“One of [Black’s] strongest mysteries . . . But the real joy of Murder on the Left Bank is in its familiar cast and its thoughtful, witty, occasionally melancholy evocation of Paris, the city where we keep so many of our most beautiful ideas about what life might mean.”
—USA Today

“Cara Black’s Aimée Leduc is a gem: a stylish, brave private detective (and new mom) who zips around Paris on a scooter . . . Beguiling tours of some of Paris’ little-known corners.”
—The Seattle Times