Try Not to Suck: The Exceptional, Extraordinary Baseball Life of Joe Maddon (Hardcover) 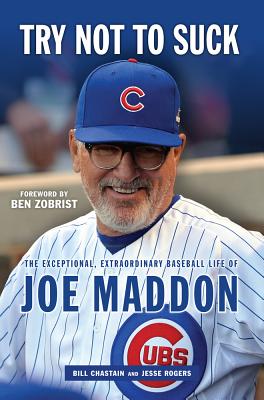 By Bill Chastain, Jesse Rogers, Ben Zobrist (Foreword by)
$25.95
This book is out of stock and awaiting a reprint. Please check back later for availability changes.

With his irreverant personality, laid-back approach, and penchant for the unexpected, Joe Maddon is a singular presence among Major League Baseball managers. Whether he's bringing clowns and live bear cubs to spring training or leading the Chicago Cubs to their first World Series victory in 108 years, Maddon is always one to watch.  In Try Not to Suck, ESPN's Jesse Rogers and MLB.com's Bill Chastain fully explore Maddon's life and career, delving behind the scenes and dissecting that mystique which makes Maddon so popular with players and analysts alike. Packed with insight, anecdotes, and little-known facts, this is the definitive account of the curse-breaker and trailblazer at the helm of the Cubs' new era.

Bill Chastain is a sports journalist who covers the Tampa Bay Rays for MLB.com. He is the author of 100 Things Jets Fans Should Know and Do Before They Die, Hack’s 191: Hack Wilson and His Incredible 1930 Season, Payne at Pinehurst: The Greatest U.S. Open Ever, Purpose and Passion: Bobby Pruette and the Marshall Years, Steel Dynasty: The Team that Changed the NFL, and The Steve Spurrier Story: From Heisman to Head Ball Coach. He lives in Tampa, Florida. Jesse Rogers has been part of the Chicago sports media scene since the mid 90's. He covered the Chicago Blackhawks for ESPN when they broke their championship drought in 2010 and was an insider on the Cubs beat when they won the World Series in 2016. He's been a television, internet and radio reporter for ESPN since 2009 and was previously heard on 670 The Score as a longtime studio host for Blackhawks radio broadcasts. Ben Zobrist is a three-time All-Star, two-time World Series champion, and was the 2016 World Series MVP with the Chicago Cubs.