The Gospel of Orla: A Novel (Paperback) 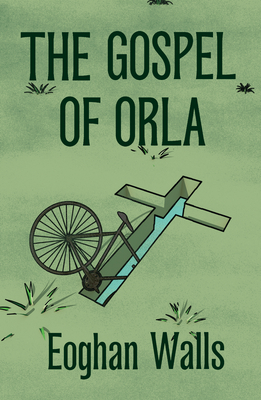 A stunning debut novel from the Northern Irish poet Eoghan Walls, The Gospel of Orla is the coming-of-age story of a young girl, Orla, and the man she meets who has an astonishing and unique ability.

It is also a road novel that takes us across the north of England after the two flee Orla’s village together. Here the mysteries of faith charge full bore into the vagaries of contemporary mores. A humorous, wise, deeply human and sometimes breathtaking work of lyrical fiction.

“A melancholic, funny, and magical coming-of-age story, The Gospel of Orla is glorious, wise, and totally weird. I loved it.” —Annie Hartnett, author of Unlikely Animals

"Utterly convincing and fresh and original."
—Colm Tóibín, author of The Magician

"In his debut novel, poet Eoghan Walls imagines the intersection of the material and the mystic. . . . As the troubled teenager ricochets between circus illusion and divine touch, she and the reader are beckoned to ponder where magic ends and miracles begin." —Kia Corthron, author of Moon and the Mars

EOGHAN WALLS is a Northern Irish poet. He has lived and worked in Ireland, Britain, Germany and Rwanda. He won an Eric Gregory Award in 2006, and his poetry has been shortlisted for multiple international awards, including the Bridport Prize, the Manchester Poetry Prize and the Piggott Prize. He has published the first major translation of Heidegger’s poetical works and currently teaches Creative Writing at Lancaster University. The Gospel of Orla is his debut novel.

"[Orla] is a brilliantly engaging protagonist. By blending a fable-like structure and Orla’s grittily realistic voice, Walls has created a consistently surprising, evocative, almost impossible to put down, and gloriously original work."
—Booklist

"The Gospel of Orla is written with immense control and precision so that the voice of the protagonist emerges as alive, individual and memorable. Eoghan Walls manages to make every single emotion Orla feels—every thought, response and action—utterly convincing and fresh and original."
—Colm Tóibín, author of The Magician

"In his debut novel, poet Eoghan Walls imagines the intersection of the material and the mystic when a grieving adolescent stumbles upon a struggling savior. Walls provides an authentic and page-turning narrative from the perspective of his restless and ever-beguiling protagonist. As the troubled teenager ricochets between circus illusion and divine touch, she and the reader are beckoned to ponder where magic ends and miracles begin."
—Kia Corthron, author of Moon and the Mars

“A melancholic, funny, and magical coming-of-age story, The Gospel of Orla is glorious, wise, and totally weird. I loved it.”
—Annie Hartnett, author of Unlikely Animals

"The Gospel of Orla is an astonishing feat of characterisation and storytelling. The prose is both earthy and sparkling and the story—equal parts bravado and vulnerability—is told with both wit and tenderness. Everyone should read this."
—Jenn Ashworth, author of Ghosted

"Eoghan Walls writes with humour, inventiveness and irreverence in The Gospel of Orla. Its wholly convincing adolescent lead is neither hero, anti-hero, nor villain. The people she encounters are neither saints nor sinners, however we might mistake them for the same. This novel is exactly the sort of searching, truth-troubling story that Orla needs to read, that would surely stay with her."
—Caoilinn Hughes, author of The Wild Laughter and Orchid & the Wasp

“What a perfect little miracle of a book. Walls has somehow explained the questions posed by yearning and the answers supplied by faith. And all in the voice of a bold, sad, brave, young delinquent. Here, in this slender volume, is the whole circus that is life, comprised, as it always is, of Doritos and heartbreak; cellphones and the love a parent has for his child; tshirts and sacrifice. A real beauty.” —Erica Eisdofer, Flyleaf Books, Chapel Hill, North Carolina

“This is a taut, suspenseful novel, narrated by a perceptive and unforgettable young heroine. Orla’s wits, determination, and pain shoot through every page, and through her eyes Eoghan Walls writes an arresting story of family, loss, and growing up that speaks eloquently to our times.” —Furaha Norton, Joseph Beth Booksellers, Cincinnati OH

“A touching, jaunty coming of age story with dark and humorous overtones, The Gospel of Orla is right up my alley. I thought Walls' lyrical prose really worked in helping establish a voice and presence for her young nearly-adult main character. If you're interested in authors who aren't afraid to take risks in the pursuit of creating something new and exciting, I'd recommend this read for sure.” —David Bouklas, Boukie's Bookshop, South-West of France

“It is only January, and already I know this book will be in my top ten of the year. I would follow Orla and Jesus anywhere. This is the kind of gospel I can get behind.” —Bex Frankeberger, Books Are Magic, Brooklyn NY

“When Orla teams up with Jesus it's only the latest in her schemes to escape the reality of her mother's death. She's an unforgettable character and I can easily imagine her as one of the troublemakers at my old high school. Here's to the Orlas of the world!” —Anne Holman, The King's English Bookshop, Salt Lake City, Utah

“A charmingly curious novel that skirts the edges of both classic Irish themes surrounding faith and loss that also blends it with a supernatural coming of age comedy. Somehow The Gospel of Orla is simultaneously zany and sincere, tackling both parental loss and a whimsical, yet heart breaking, look at a post-Christianity Jesus. This is an triumphant debut for Walls and makes me excited for their next work.” —Isaiah Scandrette, Folio Books, San Francisco, California

“It took a single paragraph for me to be wholeheartedly rooting for surly Orla, despite her sometimes delinquent methods. Her struggle to square the crushing mundane of mortality with sudden, wondrous, mythic magic is so endearing.” —Amanda Qassar, Warwick’s, La Jolla, California

“The Gospel of Orla is a debut from Northern Irish poet Eoghan Walls who brilliantly conveys to the reader all the rapidly changing and overwhelming emotions of the creative and somewhat rascally Orla.” —Lyn Roberts, Square Books, Oxford, Mississippi

“Orla is beautifully and believably drawn through funny and devastating inner-dialogue. As she grapples with the nonsensical nature of her grief, her adolescence is on beautiful display. Eoghan Walls has written a complex, achingly sad, and lovingly hopeful novel of a young girl whose faith is shattered, and yet, she is determined to gather the pieces and look them straight in the face.” —Margaret Leonard, Dotters Books, Eau Claire, Wisconsin

"We all have voices in our heads narrating our daily lives, feelings, and inner thoughts. Eoghan Walls has done a breathtaking job of letting us listen to the inside voice of Orla, a 14 year old girl struggling with her rearranged reality in the wake of her mother's recent death and her father's love for too much alcohol.  Her voice is both peripatetic and poetic as she tries to run away from it all. In the process, Orla meets a man named Jesus who can resurrect dead animals, an abused circus elephant, and her own raw emotion." —Wendy Wasserman, Politics & Prose, Washington DC

“The beauty of this book lies in the writing. Orla's voice rings so true, that the reader is with her every step of the way. The Gospel of Orla is a lyrical and mesmerizing read. I loved it.” —Pat Rudebusch, Orinda Books, Orinda, California

“This debut coming-of-age novel from poet Walls is packed with dark, quirky charm. . . . The Gospel of Orla is the strangest of all buddy stories, full of pitch-black, broody humor.” —Grace Harper, Mac's Backs, Cleveland Heights, Ohio

“Teenage Orla's mother has died, and she is struggling with her grief.  She meets a man called Jesus and they run away to try to get to Ireland where her mother is buried. This is an appealing coming of age story that would lead to much discussion. What a good book. I’ll feature it in the March book club email.” —Beth Carpenter, The Country Bookshop, North Carolina

"Walls infuses the book with such kinetic energy and assuredness that you wouldn't think this is his debut. And Orla is such a sympathetic and magnetic character, the book is effortless to read despite the quite heavy themes." —Bennard Fajardo, Politics and Prose Bookstore, Washington, DC

"Orla is grieving the lost of her mother when she attempts to leave her father and baby sister behind to go to Ireland. Her first attempt fails miserably. A coming-of-age novel that is witty, bold and lyrical; it reminds us what it means to be human." —Shannon Alden, Literati Books, Ann Arbor, Michigan

"OMG just finished The Gospel of Orla and I am sobbing. So brilliant. The voice, the characters, it's fantastic. Will be handselling like crazy." —Maria Roden, Olivia & Daisy Bookstore, Carmel Valley, California