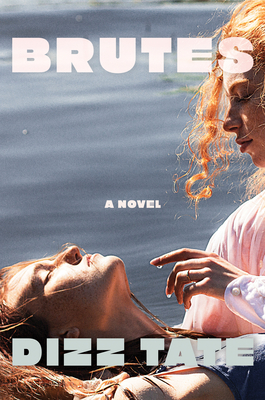 “In her outstanding debut, Dizz Tate has created a searing look at a group of young friends, the Brutes, who move as one and disrupt as they go. Set in Florida and traveling across time, Brutes illustrates childhood devoid of innocence.”
— Caitlin Baker, Island Books (WA), Mercer Island, WA

The Virgin Suicides meets The Florida Project in this wildly original debut—a coming-of-age story about the crucible of girlhood, from a writer of rare and startling talent


In Falls Landing, Florida—a place built of theme parks, swampy lakes, and scorched bougainvillea flowers—something sinister lurks in the deep. A gang of thirteen-year-old girls obsessively orbit around the local preacher's daughter, Sammy. She is mesmerizing, older, and in love with Eddie. But suddenly, Sammy goes missing. Where is she? Watching from a distance, they edge ever closer to discovering a dark secret about their fame-hungry town and the cruel cost of a ticket out. What they see will continue to haunt them for the rest of their lives.

Through a darkly beautiful and brutally compelling lens, Dizz Tate captures the violence, horrors, and manic joys of girlhood. Brutes is a novel about the seemingly unbreakable bonds in the "we" of young friendship, and the moment it is broken forever.

DIZZ TATE grew up in Florida and lives in London, U.K. She has had short stories published in Granta, The Stinging Fly, Dazed, No Tokens Journal, Five Dials, 3:AM Magazine, among other publications. She was long-listed for the Sunday Times Audible Short Story Award in 2020 and won the Bristol Short Story Prize in 2019. Brutes is her first novel.

Named a Most Anticipated Book by Time, Nylon, Literary Hub, CrimeReads, Our Culture Magazine, and more
Goodreads, A Buzziest Debut Novel of the Year

"With easily one of the most cinematic covers of the year’s new release slate, Dizz Tate’s Brutes is marketed as The Virgin Suicides meets The Florida Project. That’s an apt comparison, considering the violent, dangerous pleasures lurking in this coming-of-age story, which follows a group of young girls who flock around the radiant local televangelist’s daughter—until she one day disappears. This is a riveting tale, one that refuses to sacrifice nuance nor insight for the sake of its propulsive narrative." —Elle, A Most Anticipated Title of the Year

[A] magic realist, warped Florid a fairy tale, a Lynchian reinterpretation of The Virgin Suicides . . . Tate acutely captures the precariousness of girlhood, its growing pains and what it is to be “born out of rage.”' —The Observer [UK]

"An astonishing debut that will burrow under your skin." —The Sunday Times (London)

“Narrated by an intense voice—the crowded 'we'—Brutes uses an imagistic, unnerving language to tell the story of these girls and their young, 'hatching hearts.'” —Bustle, A Most Anticipated Book of the Year

"Told from a perspective reminiscent of The Virgins Suicides and the unflinching style of The Florida Project, Dizz Tate immediately makes her mark with her debut novel Brutes." —Chicago Review of Books

"A surreal and ambitious debut novel . . . Brutes’s adolescent cast, time-jumping narrative, and promise of violence evoke the hit show Yellowjackets." —The Millions, A Most Anticipated Read

"Dark and beautiful instantly come to mind when thinking about how to describe the teenage girl friendship in this book. Dark and beautiful also describes Tate’s writing. It explores coming-of-age in such new and unique ways. Brutes will mesmerize you and catch you off guard with how accurate yet unpredictable it is." —Debutiful

"Through a darkly beautiful and brutally compelling lens, Dizz Tate captures the violence, horrors, and manic joys of girlhood. Brutes is a novel about the seemingly unbreakable bonds in the 'we' of young friendship, and the moment it is broken forever." —Kailey Brennan Dellorusso, Write or Die Magazine

"Brutes offers stark and unlovely characterizations, but with moments of striking beauty. The girls (and their mothers) are grasping, even desperate, but capable of compassion. Tate's Florida is steamy and thickly rank, with blinding sunlight and shadowy depths . . . This is a dark coming-of-age tale and meditation on childhood and the cusp of adolescence: authentic . . . with glimmers of hope." —Shelf Awareness

"Tate's debut novel is for readers looking for a riveting plot only topped by its captivating voices, at times honest and vulnerable, at others chilling in their detachment, Tate’s prose enhances the conspiratorial relationship of these characters bonded by fickle friendship pacts, violence, and love. Simultaneously disturbing and sentimental, Brutes is a true reflection of girlhood." —Booklist

"Innovative, urgent, and endlessly lush, Brutes is the rapturous story of darkly shifting allegiances among a group of obsessive teenage girls. A masterful sentence maker, Tate is a startling and singular new voice, and her debut novel is so taut and intense it might just catch fire." —Kimberly King Parsons, author of Black Light

"The mystery and the danger of being a girl, of feeling crazy and vulnerable and wild, wanting to run away and be someone—anyone—is captured here across a landscape of nail polish and fire and sex, a sinister lake and the pink sky of Florida. Brutes is a beautiful and deeply strange novel, full of dread and longing. I loved it." —Mariana Enríquez, author of Our Share of the Night and Things We Lost in the Fire

"The many voices of Brutes tell the reader seductive, dangerous stories about the lives of girls and women in Florida. Lyrical, propulsive, and at times savagely funny, this is an impressive debut by Dizz Tate, and it sucked me in from start to finish." —Alix Ohlin, author of We Want What We Want