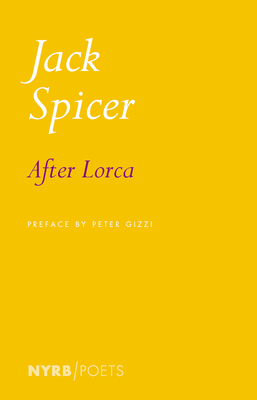 Out of print for decades, this is the legendary American poet's tribute to Federico García Lorca, including translations of the great Spanish poet's work.

Jack Spicer was one of the outstanding figures of the mid-twentieth-century San Francisco Renaissance, bent on fashioning a visionary new lyricism. Spicer called his poems “dictations,” and they combine outrageous humor, acid intelligence, brilliant wordplay, and sheer desolation to incandescent effect.

“Frankly I was quite surprised when Mr. Spicer asked me to write an introduction to this volume,” writes the dead Federico García Lorca at the start of After Lorca, Spicer’s first book and one that, since it originally appeared in 1957, has exerted a powerful influence on poetry in America and abroad. “It must be made clear at the start that these poems are not translations,” Lorca continues. “In even the most literal of them Mr. Spicer seems to derive pleasure in inserting or substituting one or two words which completely change the mood and often the meaning of the poem as I had written it. More often he takes one of my poems and adjoins to half of it another of his own, giving rather the effect of an unwilling centaur. (Modesty forbids me to speculate which end of the animal is mine.) Finally there are an almost equal number of poems that I did not write at all (one supposes that they must be his).” What so puzzles Lorca continues to delight and inspire readers of poetry today.

Jack Spicer (1925–1965) was a poet and linguist born in Los Angeles, California. At the University of California, Berkeley, he became close friends with the poets Robin Blaser and Robert Duncan, and with them he went on to play a central role in the San Francisco Renaissance of the late 1940s and the 1950s. During his life, Spicer published six short books of poetry, all with small, local presses. He died of alcohol poisoning in the poverty ward of San Francisco General Hospital.

Peter Gizzi is the author of many collections of poetry, most recently Now It’s Dark and Archeophonics (a finalist for the 2016 National Book Award). His editing projects have included The House That Jack Built: The Collected Lectures of Jack Spicer and, with Kevin Killian, My Vocabulary Did This to Me: The Collected Poetry of Jack Spicer. He works at the University of Massachusetts, Amherst.

“Mr. Spicer’s love poems curdle around the edges. He was one of America’s great, complicated, noisy and unjustly forgotten poets of heartbreak and abject loneliness . . . his work was often improbably humane and lovely.” —Dwight Garner, The New York Times

“Through parody and pastiche he exploded every form he touched.” —The Nation

“I also find great playfulness, humor and tenderness in some of these poems, and very little shamming, or cant. The first of the Collected Books is After Lorca for which Spicer provided a charming piece of fraudulence, an introductory letter by the dead poet from Andalusia protesting Spicer’s liberties with his poems. Spicer in “After Lorca” was attempting to collaborate with a corpse, rather than merely translate his works. The poets, after all, had certain obvious affinities: an interest in language, their homosexuality, a common derangement of the sensibilities such as that other great homosexual poet, Rimbaud, had recommended.” —Richard Elman, The New York Times