The Genius of Birds (CD-Audio) 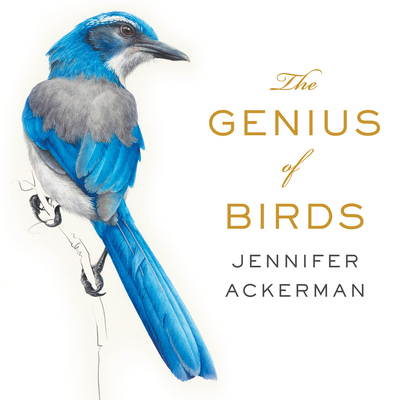 By Jennifer Ackerman
Email or call for price.
It is unlikely that we can get a hold of this title. Please email orders@nowherebookshop.com before placing an order.

Birds are astonishingly intelligent creatures. In fact, according to revolutionary new research, some birds rival primates and even humans in their remarkable forms of intelligence. Like humans, many birds have enormous brains relative to their size. Although small, bird brains are packed with neurons that allow them to punch well above their weight.
In The Genius of Birds, acclaimed author Jennifer Ackerman explores the newly discovered brilliance of birds and how it came about. As she travels around the world to the most cutting-edge frontiers of research— the distant laboratories of Barbados and New Caledonia, the great tit communities of the United Kingdom and the bowerbird habitats of Australia, the ravaged mid-Atlantic coast after Hurricane Sandy and the warming mountains of central Virginia and the western states—Ackerman not only tells the story of the recently uncovered genius of birds but also delves deeply into the latest findings about the bird brain itself that are revolutionizing our view of what it means to be intelligent.
Consider, as Ackerman does, the Clark’s nutcracker, a bird that can hide as many as 30,000 seeds over dozens of square miles and remember where it put them several months later; the mockingbirds and thrashers, species that can store 200 to 2,000 different songs in a brain a thousand times smaller than ours; the well-known pigeon, which knows where it’s going, even thousands of miles from familiar territory; and the New Caledonian crow, an impressive bird that makes its own tools.
But beyond highlighting how birds use their unique genius in technical ways, Ackerman points out the impressive social smarts of birds. They deceive and manipulate. They eavesdrop. They display a strong sense of fairness. They give gifts. They play keep-away and tug-of-war. They tease. They share. They cultivate social networks. They vie for status. They kiss to console one another. They teach their young. They blackmail their parents. They alert one another to danger. They summon witnesses to the death of a peer. They may even grieve.
This elegant scientific investigation and travelogue weaves personal anecdotes with fascinating science. Ackerman delivers an extraordinary story that will both give readers a new appreciation for the exceptional talents of birds and let them discover what birds can reveal about our changing world. Incredibly informative and beautifully written, The Genius of Birds richly celebrates the triumphs of these surprising and fiercely intelligent creatures.

Jennifer Ackermanhas been writing about science, nature, and human biology for almost three decades. Her books include"Sex Sleep Eat Drink Dream: A Day in the Life of Your Body; Chance in the House of Fate: A Natural History of Heredity;"and"""Notes from the Shore." She is a contributor to" National Geographic, The New York Times," and many other publications. "