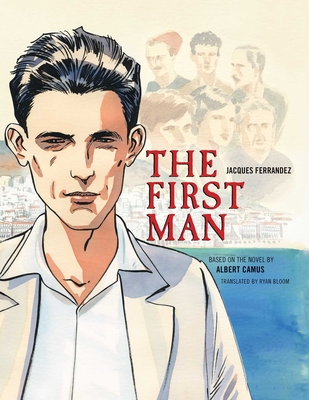 By Albert Camus, Jacques Ferrandez (Adapted by), Ryan Bloom (Translated by)
$25.95
Available at wholesaler. We can order it for you.

A visually arresting adaptation of Albert Camus’s masterful biographical novel that offers a new graphic interpretation for the next generation of readers.

This new illustrated of Camus’s final novel tells the story of Jacques Cormery, a boy who lived a life much like Camus’s own. This stunning, fully illustrated edition summons up the sights, sounds and textures of a childhood defined by poverty and a father's death, yet redeemed by the austere beauty of Algeria—and the young protagonist's attachment to his nearly deaf-mute mother.

In telling the story of his metaphorical search for his father, who died in World War I, Camus returns to the "land of oblivion where each one is the first man" and must find his own answers. Published thirty-five years after its discovery amid the wreckage of the car accident that killed the Nobel Prize–winning novelist, this graphic interpretation of The First Man is the brilliant consummation of the life and work of one of the twenty century's greatest authors.

Albert Camus was born in Algeria in 1913. During World War II, he joined the Resistance movement in Paris, then became editor-in-chief of the newspaper Combat during the Liberation. A novelist, playwright, and essayist, he is most famous for his novels The Stranger and The Plague. He was awarded the Nobel Prize for Literature in 1957.

Jacques Ferrandez was born in Algeria in 1955. In 1987, he began his Notebooks from the Orient, a series of panoramic portraits depicting the history of the French presence in Algeria, for which he was awarded the Historia Prix Spécial. An indisputable expert on the Algerian question, he adapted Camus’s novel The Stranger as well as his new interpretation of The First Man. His books have been the subject of many exhibitions in France and Algeria.

Ryan Bloom is a Senior Lecturer at the University of Maryland, Baltimore County. His translations and writings have appeared in the New Yorker, Tin House, New England Review, Guernica, PEN America, the American Prospect, and a variety of other publications. His translation of Albert Camus’ Notebooks 1951–1959 (Rowman and Littlefield) was nominated for the 2009 French-American Foundation and Florence Gould Foundation Prize for Superior English translation of French prose. In 2014 he was awarded the Eli Cantor Fellowship by the Corporation of Yaddo.

"Vivid and memorable. The figure of Cormery’s domineering grandmother, taking a rawhide switch to the troublemaking boy or up to her elbow in a toilet recovering a two-franc piece, is a synecdoche for the country’s intransigence and desperation. In an indelible chapter recalling a hunting trip in the countryside, Mr. Ferrandez’s panels open up to reveal the land in all its harshness and sun-bleached beauty."
— Wall Street Journal

"Fragments by Camus are tenderly knitted together by translator Bloom and cartoonist Fernandez."
— Publishers Weekly

"The First Man is perhaps the most honest book Camus ever wrote, and the most sensual. Camus is writing at the depth of his powers. It is a work of genius."
— The New Yorker [On Albert Camus's THE FIRST MAN]

"A masterpiece. One of the most extraordinary evocations of childhood that exists in any language."
— The Boston Globe [On Albert Camus's THE FIRST MAN]

"Serves as a kind of magical Rosetta stone to Camus's entire career, illuminating both his life and his work with stunning candor and passion."
— Michiko Kakutani, The New York Times [On Albert Camus's THE FIRST MAN]

"Ferrandez excels with the pale vistas and brilliant light of Algeria, almost a character in the story. An expressive and attractive version of Camus’s challenging parable."
— Library Journal [On Jacques Ferrandez's THE STRANGER: THE GRAPHIC NOVEL]