Penis Politics: A Memoir of Women, Men and Power (Paperback) 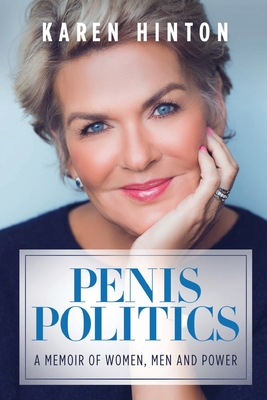 Penis Politics: A Memoir of Women, Men and Power is a compelling coming-of-age story, set both in small-town Mississippi and big-city New York, with a long layover in the nation's capital. Karen Hinton chronicles her life from tiny Soso, Mississippi (pop. 408), to the University of Mississippi (Ole Miss), where she played on the Lady Rebels basketball team, had embarrassing encounters with literary luminaries such as William Styron and Willie Morris, and received a degree in journalism . . . to stints at two newspapers, where she worked as a reporter-the Jackson Daily News and the Rocky Mountain News-to working on the political campaigns of two Black political candidates, one of whom was elected to Congress, thus becoming the first Black representative from Mississippi since Reconstruction.

Hinton went on to become one of the most colorful and outspoken political communications professionals in Washington and New York. Best known for her role as press secretary to both former Housing Secretary Andrew Cuomo and New York Mayor Bill De Blasio, Karen played what Politico dubbed the "Helen of Troy role" in the clash between the former Governor of New York and the Mayor that the New York Times called "one of America's ugliest political feuds." The Wall Street Journal described "the wisdom she dispensed in a Southern twang" in dealing with the strutting and chest pounding of New York's two most powerful leaders.

After a decade spent running her own public relations firm in Washington, taking on issues she cared about-poverty, urban economies, the environment-she relocated to New York and became Mayor de Blasio's press secretary. She found herself at the center of the crossfire between longtime frenemies Cuomo and de Blasio, often becoming the subject of news coverage herself. She ascribes her success to ignoring the advice a boy in high school inscribed in her yearbook: "Karen, we love you, but would you please shut up "

At the center of Hinton's incredible rise to the pinnacle of success was an undercurrent of men behaving badly. The role that "penis politics" played in Hinton's life began in childhood with school employees who demanded sexual favors from her female classmates-and extended throughout her life as she bore witness to the struggles that she and her friends and colleagues have undergone to deal with sexual abuse, sexual harassment and gender discrimination.