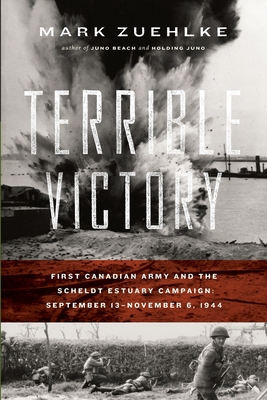 This print-on-demand title is available by request from most booksellers.

Terrible Victory is a gripping account of Canada's bloody liberation of western Holland, one of our finest, and most costly, military victories.

On September 4, 1944, Antwerp, Europe's largest port, fell to the Second British Army and it seemed the war would soon be won. But Antwerp was of little value unless the West Scheldt Estuary linking it to the North Sea was also in Allied hands. In his greatest blunder of the war, Field Marshal Montgomery turned his back on the port, leaving the First Canadian Army to fight its way up the long coastal flank.

By the time the Canadians and others serving with them reached the area, it had been transformed into a fortress manned by troops ordered to fight to the death. Crushing the Nazi defenders required all of the Canadians' courage, endurance and skill. The battle that raged until November was Canada's bloodiest of World War II, costing more than 6,000 casualties.