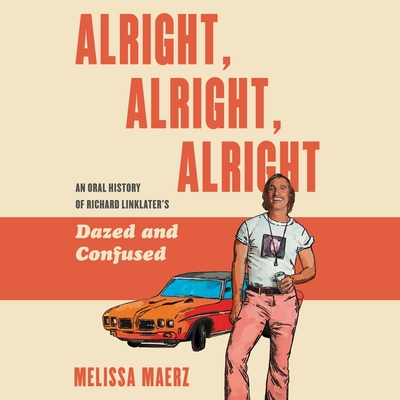 By George Newbern (Read by), Brittany Pressley (Read by), Melissa Maerz
$39.99
This book is out of stock and awaiting a reprint. Please check back later for availability changes.

The definitive oral history of the cult classic Dazed and Confused, featuring behind-the-scenes stories from the cast and crew and written with the cooperation of Oscar-nominated director Richard Linklater. The production includes an exclusive conversation between Melissa Maerz and Richard Linklater at the end of the audiobook.

Dazed and Confused not only heralded the arrival of filmmaker Richard Linklater, it introduced a cast of unknowns who would become the next generation of movie stars. Embraced as a cultural touchstone, the 1993 film would also make Matthew McConaughey's famous phrase--alright, alright, alright--ubiquitous. But it started with a simple idea: Linklater thought people might like to watch a movie about high school kids just hanging out and listening to music on the last day of school in 1976.

To some, that might not even sound like a movie. But to a few studio executives, it sounded enough like the next American Graffiti to justify the risk. Dazed and Confused made almost no money at the box office and seemed destined to disappear. Then something weird happened: Linklater turned out to be right. This wasn't the kind of movie everybody liked, but it was the kind of movie certain people loved, with an intensity that felt personal. No matter what their high school experience was like, they thought Dazed and Confused was about them.

Alright, Alright, Alright is the story of how this iconic film came together and why it worked. Combining behind-the-scenes insights from nearly the entire cast, including Matthew McConaughey, Parker Posey, Ben Affleck, Joey Lauren Adams, and many others, and with the full cooperation of Linklater himself, it offers an inside look at how a budding filmmaker and a cast of newcomers made a period piece that would feel timeless for decades to come.