Illuminations of Hildegard of Bingen (Paperback) 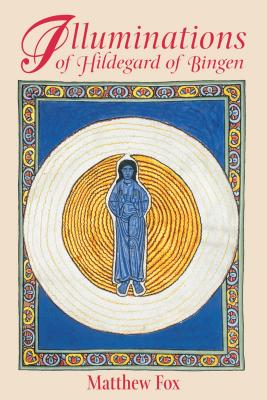 An introduction to the life and work of Hildegard.

• Reveals the life and teachings of one of the greatest female artists and intellectuals of the Western Mystical Tradition.

Hildegard of Bingen (1098-1179) was an extraordinary woman living in the Rhineland valley during most of the twelfth century. Besides being the abbess of a large and influential Benedictine abbey, she was a prominent preacher, healer, scientist, and artist. She also was a composer and theologian, writing nine books on theology, medicine, science, and physiology, as well as 70 poems and an opera. At the age of 42, she began to have visions; these were captured as 36 illuminations--24 of which are recorded in this book along with her commentaries on them. She also wrote a text describing these visions entitled Scivias (Know the Ways), now published as Hildegard of Bingen's Mystical Visions.

Author Matthew Fox has stated, "If Hildegard had been a man, she would be well known as one of the greatest artists and intellectuals the world has ever seen." It is a credit to the power of the women's movement and our times that this towering genius of Western thought is being rediscovered in her full grandeur and autonomy.

Virtually unknown for more than 800 years in Western history, Hildegard was featured as one of the women in Judy Chicago's Dinner Party in the early 1980s and published for the first time in English by Bear & Company in 1982. In addition to her mystical teachings, Hildegard's music has been performed and recorded for a new and growing audience.

Matthew Fox was a member of the Dominican Order in good standing for 34 years until he was expelled by former Pope Joseph Ratzinger, who was a cardinal and chief inquisitor at the time. Matthew Fox is the founder of Wisdom University (formerly the University of Creation Spirituality) and the foremost proponent of Creation Spirituality, based on the mystical teachings of early Christian visionaries such as Hildegard von Bingen, Meister Eckhart, and Saint Thomas Aquinas. He is the author of 26 books, including Original Blessing and The Coming of the Cosmic Christ. In 2019, Matthew Fox was cited as one of the "100 Most Spiritually Influential Living People in the World" according to Watkins Mind Body Spirit magazine.

"If one person deserves credit for the great Hildegard renaissance in our time, it is Matthew Fox. Here in the long-lost legacy of Hildegard of Bingen is a mystical genius who could help to illumine the human soul spiritually, ecologically, politically--in every dimension of life."
— Mary Ford-Grabowsky, author of Sacred Voices

"She [Hildegard] castigated a pope for his timidity and an emperor for moral blindness. She taught scholars and preached to clergy and laity as no woman before her had ever done. . . . She claimed that now woman rather than man--obviously Hildegard herself--was to do God's work. It is difficult not to see in her visionary experience and activism, as well as her claim for the mission of woman in a male-dominated age, a gesture of protest, the reaction of an intelligent and energetic woman who chafed under the restraints imposed on women by the culture in which she lived."
— Bernard W. Scholz, The American Benedictine Review

"We find relatively few Christian guides in the past to enlighten or to inspire us to a more functional relationship between the human and the natural worlds. . . . Hildegard might be considered a model with her sense of the earth as region of delight. . . . She has reached far into the emotionally exciting aspects of nature in a unique mode of Christian communion. She sees the creation maker in the ancient manner of the fertility cults, a view she expresses in her statement that creation and creator are related as woman and man. Only thus is the earth fruitful. . . . Because of this 'erotic' bond the earth becomes luxuriant in its every aspect."
— Thomas Berry, author of The Great Work and The Dream of the Earth