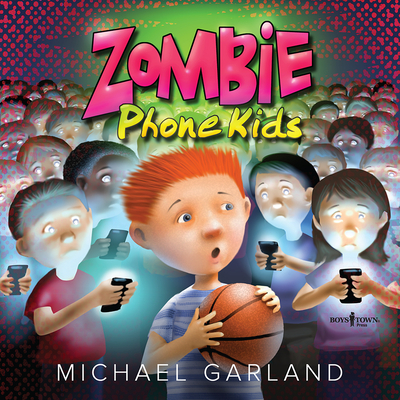 Blank faces. Pale skin. Vacant eyes. Hands that constantly clutch digital devices. This is a world where everyone under the age of 17 has turned into a ZOMBIE PHONE KID

Day and night, zombie kids stare at their phones and me-pads until their eyes are a ghoulish shade of icy blue. They don't read books. They don't play outside. They don't talk to one another. They are captive to what they see and hear on the screens in front of them and that's just how the BIG IDEA Company wants it

BIG IDEA controls the digital world, telling kids what to like, what to buy, and even what to think. They've turned Ricky and an entire generation into digital device addicts who can't put down, turn away from, or turn off their electronics.

Ricky is so addicted to and distracted by his phone; he always forgets to feed his fish. But one day, while alone in his bedroom, he is unexpectedly overcome by feelings of boredom and exhaustion. When he sees his poor little goldfish looking extremely sad, Ricky has the urge to drop his phone into the fish tank and watch it sink to the bottom. But the thought of destroying his precious device is too much, so he buries it in the bottom of a drawer instead.

Now free of his phone, Ricky thinks it might be fun to shoot hoops at the playground. Has he finally broken the zombie spell? Will the sight of him playing basketball alone inspire his friends to put down their phones, go outside, and play too? Is the world of zombie phone kids coming to an end?

Zombie Phone Kids presents a haunting, yet eerily familiar, world where technology and kids run amok. The lesson for young readers is clear; use electronics responsibly. A special page for parents offers tips to help prevent kids from turning into tech zombies.

Michael Garland is a bestselling author and illustrator of more than 30 children's books, including the award-winning&nbpsGet Off My Lawn! He has been on the New York Times bestseller list four times and has illustrated work for celebrity authors, including James Patterson and Gloria Estefan. Michael was born in Manhattan and studied art at Pratt Institute. He is a highly sought-after speaker and popular guest at literary conferences, festivals, and schools.