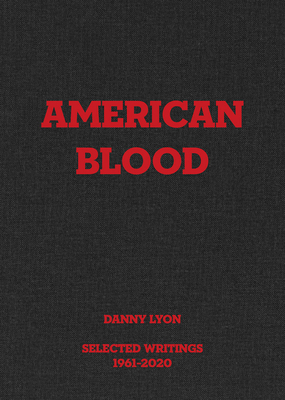 By Danny Lyon, Danny Lyon (Photographer), Randy Kennedy (Editor)
$35.00
Available at wholesaler. We can order it for you.

A half-century of social change in America, documented in the writings of Danny Lyon, photographer and author of The Bikeriders and The Destruction of Lower Manhattan

"From the beginning, even before he left the University of Chicago and headed south to take up a position as the first staff photographer for the Student Nonviolent Coordinating Committee, Danny Lyon dreamed of being an artist in language as well as in pictures," writes Randy Kennedy in the introduction to American Blood. In 1961, at the age of 19, for example, Lyon penned a brutally satirical article for a student mimeo magazine in which he argued for the deterrent power of prime-time televised executions ("the show would open, no doubt, like a baseball game, with a rendition of the National Anthem").

Lyon is widely celebrated for his groundbreaking work in photography and film. Less recognized is the extensive body of writing that has broadened and reinforced his reach, in both the pages of his own publications and in others as varied as the Los Angeles Times, the New York Review of Books, Aperture, civil rights publications, underground magazines and Lyon's blog. This 400-page volume spans republished and previously unpublished texts from nearly six decades of his career, comprising a vast, meticulously archived history of American social change. Also included are conversations between Lyon and Hugh Edwards, Nan Goldin and Susan Meiselas. As Kennedy writes, Lyon's collected writings, "remarkable as both artistic and moral models, remain far too little known, especially for an author who has seen what he has seen and possesses the rare ability to write about it as he speaks; Lyon is a world-class talker, funny, wise, sanguine and indefatigable." Danny Lyon (born 1942) is one of the most influential documentary photographers of the last five decades. His many books include The Movement (1964), The Bikeriders, The Destruction of Lower Manhattan (1969), Knave of Hearts (1999), Like a Thief's Dream (2007) and Deep Sea Diver (2011).