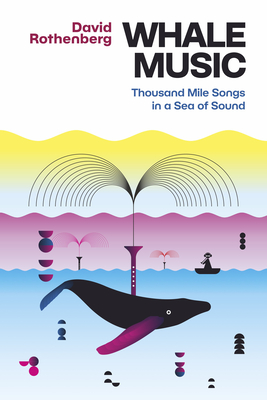 The marvelous sonic world of whales, from the perspective of music and science.

Whale song is an astonishing world of sound whose existence no one suspected before the 1960s. Its discovery has forced us to confront the possibility of alien intelligence—not in outer space but right here on earth. Thoughtful, richly detailed, and deeply entertaining, Whale Music uses the enigma of whale sounds to open up whales' underwater world of sonic mystery. In observing and talking with leading researchers from around the globe as they attempt to decipher undersea music, Rothenberg tells the story of scientists and musicians confronting an unknown as vast as the ocean itself. His search culminates in a grand attempt to make interspecies music by playing his clarinet with whales in their native habitats, from Russia to Canada to Hawaii.

This is a revised edition of Thousand Mile Song, originally published in 2008. The latest advances in cetacean science and interspecies communication have been incorporated into this new edition, along with added photographs and color whale scores.

Musician and philosopher David Rothenberg has written Why Birds Sing, Bug Music, Survival of the Beautiful, and many other books, published in at least eleven languages. He has more than thirty recordings out, including One Dark Night I Left My Silent House, and most recently In the Wake of Memories and Faultlines. He has performed or recorded with Pauline Oliveros, Peter Gabriel, Ray Phiri, Suzanne Vega, Scanner, Elliott Sharp, Iva Bittová, and the Karnataka College of Percussion. Nightingales in Berlin is his latest book and film. Rothenberg is Distinguished Professor at the New Jersey Institute of Technology.

Scott McVay was Founding Executive Director of both the Robert Sterling Clark Foundation and the Geraldine R. Dodge Foundation, where he led efforts in strategic grant-making in education (K–12), the arts, critical issues, and the welfare of animals. McVay wrote an article for Scientific American in 1966 that became a baseline document for whale conservation, and he served on the US delegation to the International Whaling Commission during the years when it began to protect whales and not just kill and count them. He discovered and documented that Humpback whales sing long, elegant, and complex songs and, together with Roger Payne, published their findings in a cover article in the journal Science in 1971.

"One of the 10 Best Science Books of the Year."
—Booklist

"This guy is capable of some mean jazz with whales. Yes, with whales. … The results are astounding."
—The New York Times

"While Rothenberg’s madcap mission to play jazz to the whales seems as crazy as Captain Ahab’s demented hunt for the great White Whale, it is sometimes such obsessions that reveal inner truths. His affecting and often moving music is aural evidence of his attempt to bridge emotion and rationality, with a faintly bonkers but undoubtedly stimulating intent: to push at the barriers between human history and natural history. By coming to a better understanding of these strange, beautiful, and sentient animals, we begin to understand ourselves, too."
—London Daily Telegraph