They Did Bad Things: A Thriller (Paperback) 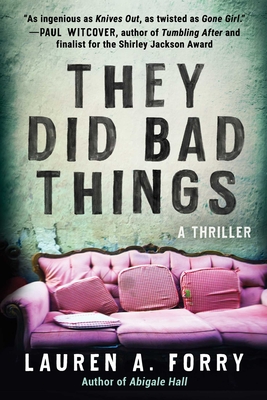 In 1995, six university students moved into the house at 215 Caldwell Street. Months later, one of them was found dead on the sofa the morning after their end-of-year party. His death was ruled an accident by the police. The remaining five all knew it wasn’t, and though they went on with their lives, the truth of what happened to their sixth housemate couldn’t stay buried forever.

Twenty years later, all five of them arrive—lured separately under various pretenses—at Wolfheather House, a crumbling, secluded mansion on the Scottish isle of Doon. Trapped inside with no way out and no signal to the outside world, the now forty-somethings fight each other—and the unknown mastermind behind their gathering—as they confront the role they played in their housemate’s death. They are given one choice: confess to their crimes or die.

They Did Bad Things is a deviously clever psychological thriller about the banality of evil and the human capacity for committing horror.

Lauren A. Forry was brought up in the woods of Pennsylvania before moving to New York City to earn her undergraduate degree in Cinema Studies and Screenwriting from New York University. She later earned her MA and MFA in Creative Writing and Publishing from Kingston University in London, England. She was awarded the Faber and Faber Creative Writing MA Prize for her thesis work, Abigale Hall, which was published by Skyhorse and translated into multiple languages. Her short stories have been featured in The X-Files: Secret Agendas, Brick Moon Fiction, and Lamplight Magazine. She currently teaches English at Harcum College and resides in Bucks County, Pennsylvania. She never murdered anyone while in college.

"A superior riff on And Then There Were None . . . Forry expertly maintains the nail-biting suspense while fully developing her characters. Agatha Christie fans won’t want to miss this one."—Publishers Weekly, starred review

"Forry keeps readers on edge. . . . The solution to the past and present mysteries involves a well-executed twist. This is one for fans of Lucy Foley's The Hunting Party."—Booklist

"Forry does a fine job keeping the surprises coming in rapid succession, making this life-like game of Clue one that will be very hard to predict when the envelope is opened and all is revealed."—bookreporter

“As ingenious as Knives Out, as twisted as Gone Girl, They Did Bad Things is a very good thing indeed.”—Paul Witcover, author of Tumbling After and finalist for the Shirley Jackson Award

“Lauren A. Forry creates a chilly, claustrophobic thriller with a group of misfit characters who not only have a history together but also a bucketful of secrets. They Did Bad Things covers all the 'dunnits'—who, what, why, where, and how—and you’ll want to read to the end to find out all the answers.”—Raymond Benson, author of Blues in the Dark and The Secrets on Chicory Lane

"Lauren A. Forry . . . is obviously well-versed in nightmares."—The Skinny