The Predators' Ball: The Inside Story of Drexel Burnham and the Rise of the Junk Bond Raiders (Paperback) 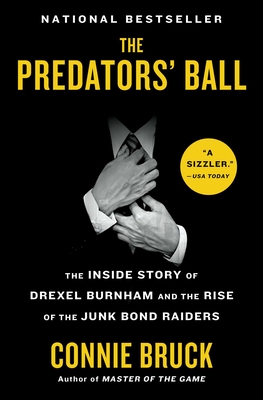 By Connie Bruck
$18.00
Usually ships in 7-10 days. Or you can try to purchase at http://www.bookshop.org/shop/nowherebookshop

“Connie Bruck traces the rise of this empire with vivid metaphors and with a smooth command of high finance’s terminology.” —The New York Times

From bestselling author Connie Bruck, The Predators’ Ball dramatically captures American business history in the making, uncovering the philosophy of greed that dominated Wall Street in the 1980s.

During the 1980s, Michael Milken at Drexel Burnham Lambert was the Billionaire Junk Bond King. He invented such things as “the highly confident letter” (“I’m highly confident that I can raise the money you need to buy company X”) and the “blind pool” (“Here’s a billion dollars: let us help you buy a company”), and he financed the biggest corporate raiders—men like Carl Icahn and Ronald Perelman. And then, on September 7, 1988, things changed...

The Securities and Exchange Commission charged Milken and Drexel Burnham Lambert with insider trading and stock fraud. Waiting in the wings was the US District Attorney, who wanted to file criminal and racketeering charges.

What motivated Milken in his drive for power and money? Did Drexel Burnham Lambert condone the breaking of laws?

Connie Bruck has been a staff writer of business and politics at The New Yorker since 1989, where her pieces have won multiple reporting and journalism awards. Her stories have also appeared in The Washington Post, The New York Times, and The Atlantic Monthly. She is the author of three books: Master of the Game, The Predators’ Ball, and When Hollywood Had a King.