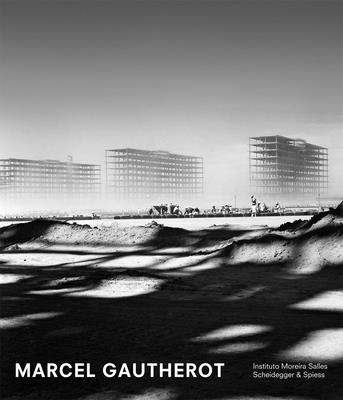 By Michel Frizot, Samuel Titan, Instituto Moreira Salles (Editor), Jacques Leenhardt
Email or call for price.
It is unlikely that we can get a hold of this title. Please email orders@nowherebookshop.com before placing an order.

Marcel Gautherot (1910–96) was a great master of twentieth-century photography, best known for his documentation in some three-thousand images of the construction of the Brazilian capital city Brasilia from 1958 to 1960. Nevertheless, his work remains relatively little known. Even those who are familiar with his beautiful photographs of the construction of Oscar Niemeyer’s Brasilia may be surprised to learn that he produced such a large and strikingly diverse body of work.
The first book to look back on Gautherot’s entire career, Marcel Gautherot: The Monograph takes readers through the architect and photographer’s time as an apprentice in Paris, where he attended evening classes and took an ardent interest in Esprit Nouveau and the Bauhaus, as well as their proponents, including Walter Gropius, Ludwig Mies van der Rohe, and Le Corbusier. In the 1930s, Gautherot abandoned his studies in architecture to follow his passion for photography. This led him to travel extensively, and he eventually came to live and work in the city of Rio de Janeiro, where he was welcomed by a circle of artists and intellectuals who became important figures in Brazilian culture, including the architects Oscar Niemeyer and Roberto Burle Marx.
With 150 superbly reproduced photographs, the book also includes essays by art and photography historians Jacques Leenhardt, Michel Frizot, and Samuel Titan on Gautherot’s affinity for modern architecture and his contribution to the history of photography. It will make the perfect book to reintroduce this important Franco-Brazilian photographer.

Michel Frizot is a curator and scholar of the history and theory of photography.

Samuel Titan is director of the Instituto Moreira Salles, a nonprofit organization based in Rio de Janeiro with cultural centers and galleries throughout Brazil with the aim of promoting the development of Brazilian cultural projects, including photography, literature, music, and the visual arts.

The Instituto Moreira Salles is a nonprofit organization based in Rio de Janeiro with cultural centers and galleries throughout Brazil with the aim of promoting the development of Brazilian cultural projects, including photography, literature, music, and the visual arts.

Jacques Leenhardt is an art critic and director of studies at the École des Hautes Études en Sciences Sociales, Paris.