The War of the Worlds: by H. G. Wells with classic and original illustrations (Paperback) 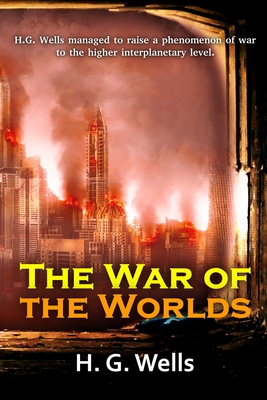 By H. G. Wells
$10.99
Usually ships in 7-10 days. Or you can try to purchase at bookshop.org/shop/nowherebookshop

The War of the Worlds by H. G. Wells with classic and original illustrations"H.G. Wells managed to raise a phenomenon of war to the higher interplanetary level."Herbert George Wells(21 September 1866 - 13 August 1946) was an English writer. Prolific in many genres, he wrote dozens of novels, short stories, and works of social commentary, history, satire, biography and autobiography. His work also included two books on recreational war games. Wells is now best remembered for his science fiction novels and is often called the "father of science fiction", along with Jules Verne and the publisher Hugo Gernsback. The War of the Worlds is a science fiction novel by English author H. G. Wells, first serialised in 1897 by Pearson's Magazine in the UK and by Cosmopolitan magazine in the US. The novel's first appearance in hardcover was in 1898 from publisher William Heinemann of London. Written between 1895 and 1897, it is one of the earliest stories to detail a conflict between mankind and an extraterrestrial race. The novel is the first-person narrative of both an unnamed protagonist in Surrey and of his younger brother in London as southern England is invaded by Martians. The novel is one of the most commented-on works in the science fiction canon.The plot has been related to invasion literature of the time. The novel has been variously interpreted as a commentary on evolutionary theory, British imperialism, and generally Victorian superstitions, fears, and prejudices. Wells said that the plot arose from a discussion with his brother Frank about the catastrophic effect of the British on indigenous Tasmanians. What would happen, he wondered, if Martians did to Britain what the British had done to the Tasmanians? At the time of publication, it was classified as a scientific romance, like Wells's earlier novel The Time Machine.The War of the Worlds has been both popular (having never been out of print) and influential, spawning half a dozen feature films, radio dramas, a record album, various comic book adaptations, a number of television series, and sequels or parallel stories by other authors. It was most memorably dramatised in a 1938 radio programme that allegedly caused public panic among listeners who did not know the Martian invasion was fiction. The novel has even influenced the work of scientists, notably Robert H. Goddard, who, inspired by the book, helped develop both the liquid fuelled rocket and multistage rocket, which resulted in the Apollo 11 Moon landing 71 years later.Content.