A Discussion with Teri Wilson, Katie Goulding, and Tracy Goodwin 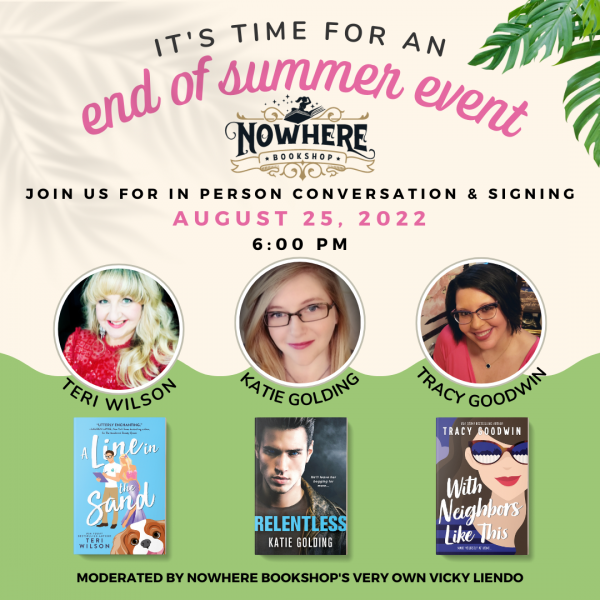 Join us for an exciting discussion and signing with three excellent romance authors. Mark your calendars today!

Teri Wilson is a USA Today bestselling author of heartwarming, whimsical romantic comedy and contemporary romance. Three of Teri's books have been adapted into Hallmark Channel Original Movies by Crown Media, including Unleashing Mr. Darcy (plus its sequel Marrying Mr. Darcy), The Art of Us, and Northern Lights of Christmas, based on her book Sleigh Bell Sweethearts. She is also a recipient of the prestigious RITA Award for excellence in romantic fiction for her novel The Bachelor’s Baby Surprise.

Teri has a major weakness for cute animals, pretty dresses, and Audrey Hepburn films, and she loves following the British royal family.

A LINE IN THE SAND

Sparks fly when Molly Prince's puppy Ursula constantly disrupts the beachfront area where new-in-town marine biologist Max Miller is studying sea turtles. Max and Molly are instantly attracted to each other, but Molly dismisses Max out-of-hand and Max refuses to take Molly seriously in her job as the aquarium's mermaid. But when Ursula reveals her unique ability to sniff out sea turtle nests, she might bring these two opposites close enough to help save the turtles and the aquarium, and maybe even fall in love.

Katie Golding is a racing fan with a writing problem. The recovering cheerleader lives in a small town outside of Austin, Texas where she’s mom to a future philanthropist and wife to a superman. Her writing playlists range from 80s love songs, 90s grunge, 00s punk, to new age underground in less time than it takes her to burn dinner, and she is currently at work on her next romance novel—unless she’s tweeting about it.

Too bad I never did play by the rules.

I've spent my whole damn life making the wrong calls. Not that anyone ever notices―whether on the track or back home, I'm always in the shadow of my perfect big brother. But anonymity has its perks sometimes...like when the firmly off-limits ex of my biggest rival finally looks my way.

Chiara Martes. Gorgeous, smart, funny, legs just made to wrap around your waist and a smile that makes my heart race faster than anything.

She claims she's just looking for some fun on the side, and I'm exactly the kind of man who can give it to her. But off-the-charts sexual chemistry (hooking up here, there, everywhere we won't get caught...and some places we might) turns into unexpected feelings we've got to keep secret no matter the cost.

And somehow, before we know it, this desperate thing between us is threatening to destroy us all.

Tracy Goodwin is the USA Today bestselling author of uplifting women’s fiction, captivating contemporary romances, and romantic comedies. In addition, she pens sweeping historical romances and vivid urban fantasies. Tracy is the mom of two, a wife, and the wrangler of two cats and a puppy. She is a New Yorker who now calls Houston home.

When divorced mom of two Amelia Marsh relocates to a northern suburb of Houston, all she wants is a bit of normalcy for her children. The last thing she needs is to be the center of community gossip. But when a disagreement arises between Amelia and the HOA representative over whether or not her children's garden gnome violates the association's rules, Amelia doesn't back down. HOA President Kyle Sanders would begin to be a good friend―and something more―if Amelia wasn't gearing up for battle with the HOA in her determination to make her house a home and her neighborhood

Too bad I never did play by the rules.

A hopeful single mom moves to the Houston suburbs to start anew, only to find a new adversary in the HOA.

A Line in the Sand (Turtle Beach) (Paperback)