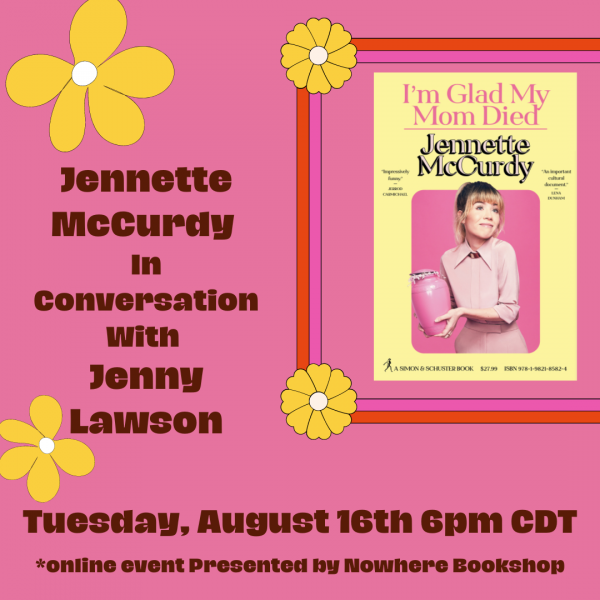 Join us for a Tuesday evening event with actress and author Jennette McCurdy discussing her new book, I'm Glad My Mom Died. She'll be joined in conversation by bestselling author and Nowhere Bookshop owner Jenny Lawson.

Ticket price includes access to the event and a copy of Jennette's book.

This event takes place on Zoom. You will need access to a computer or other device with sufficient Internet access. If you have not used Zoom before, you may consider referencing Getting Started with Zoom.

About I'm Glad My Mom Died

Jennette McCurdy was six years old when she had her first acting audition. Her mother’s dream was for her only daughter to become a star, and Jennette would do anything to make her mother happy. So she went along with what Mom called “calorie restriction,” eating little and weighing herself five times a day. She endured extensive at-home makeovers while Mom chided, “Your eyelashes are invisible, okay? You think Dakota Fanning doesn’t tint hers?” She was even showered by Mom until age sixteen, and was forced to share her diaries, email, and her entire income.

In I’m Glad My Mom Died, Jennette recounts all this in unflinching detail—just as she chronicles what happens when the dream finally comes true. Cast in a new Nickelodeon series called iCarly, she is thrust into fame. Though Mom is ecstatic, emailing fan club moderators and getting on a first-name basis with the paparazzi (“Hi Gale!”), Jennette is riddled with anxiety, shame, and self-loathing, which manifest into eating disorders, addiction, and a series of unhealthy relationships. These issues only get worse when, soon after taking the lead in the iCarly spinoff Sam & Cat alongside Ariana Grande, her mother dies of cancer. Finally, after discovering therapy and quitting acting, Jennette embarks on recovery and decides for the first time in her life what she really wants.

Told with refreshing candor and dark humor, I’m Glad My Mom Died is an inspiring story of resilience, independence, and the joy of shampooing your own hair.

JENNETTE MCCURDY starred in Nickelodeon’s hit show iCarly and its spin-off, Sam & Cat, as well as in the Netflix series Between. In 2017, she quit acting and began pursuing writing/directing. Her films have been featured in the Florida Film Festival, the Salute Your Shorts Film Festival, Short of the Week, and elsewhere. Her essays have appeared in HuffPost and The Wall Street Journal. Her one-woman show I’m Glad My Mom Died had two sold-out runs at the Lyric Hyperion Theatre and Hudson Theatre in Los Angeles. She hosts a podcast called Empty Inside, which has topped Apple’s charts and features guests speaking about uncomfortable topics. She lives in Los Angeles.

A heartbreaking and hilarious memoir by iCarly and Sam & Cat star Jennette McCurdy about her struggles as a former child actor—including eating disorders, addiction, and a complicated relationship with her overbearing mother—and how she retook control of her life.

You Are Here: An Owner's Manual for Dangerous Minds