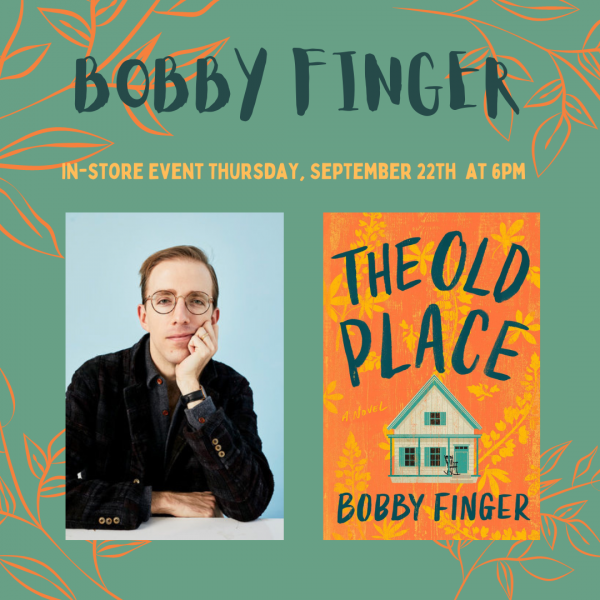 J﻿oin us in celebrating the release of The Old Place by author and podcast host Bobby Finger!

Billington, Texas, is a place where nothing changes. Well, almost nothing. For the first time in nearly four decades, Mary Alice Roth is not getting ready for the first day of school at Billington High. A few months into her retirement—or, district mandated exile as she calls it—Mary Alice does not know how to fill her days. The annual picnic is coming up, but that isn’t nearly enough since the menu never changes and she had the roles mentally assigned weeks ago. At least there’s Ellie, who stops by each morning for coffee and whose reemergence in Mary Alice’s life is the one thing soothing the sting of retirement.

Mary Alice and Ellie were a pair since the day Ellie moved in next door. That they both were single mothers—Mary Alice widowed, Ellie divorced—with sons the same age was a pleasant coincidence, but they were forever linked when they lost the boys, one right after the other. Years later, the two are working their way back to a comfortable friendship. But when Mary Alice’s sister arrives on her doorstep with a staggering piece of news, it jeopardizes the careful shell she’s built around her life. The whole of her friendship with Ellie is put at risk, the fabric of a place as steadfast as Billington is questioned, and the unflappable, knotty fixture that is Mary Alice Roth might have to change after all.

Bobby Finger is a writer and co-host of the popular celebrity and entertainment podcast, Who? Weekly. A Texas native, he lives in Brooklyn, New York. The Old Place is his debut novel.

Burgin Eaves Streetman started her career in books more than twenty years ago as a manager at the old Doubleday Book Shop on Fifth Avenue in New York City. She later worked as the assistant to the vice president of children's books at Barnes & Noble, published books for The Muppets, and was director of marketing and publicity for Artisan Books, an imprint of Workman Publishing. There she promoted titles by such culinary visionaries as Thomas Keller, Alice Medrich, Eric Ripert, and Barbara Kafka. In San Antonio she worked with the advertising agency Guerra DeBerry Coody, has written for the San Antonio Express-News and the San Antonio Current, and maintains the popular book blog Vintage Kids' Books My Kid Loves.

A bighearted and moving debut about a wry retired schoolteacher whose decade-old secret threatens to come to light and send shockwaves through her small Texas town.