Haunted libraries you can visit post-pandemic 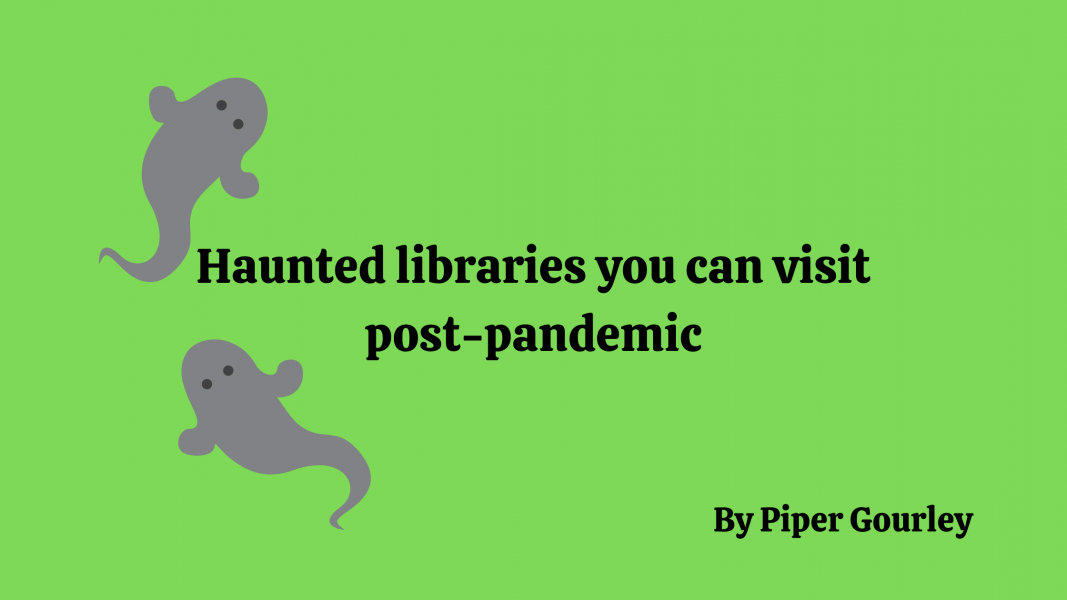 If there’s one thing that ‘Ghostbusters’ proved, it’s that libraries can be as haunted as any other place. Between the novel-stacked shelves, many libraries also boast a collection of ghouls, phantoms, and faceless figures who haunt their loyal patrons. Some libraries celebrate their ghosts, while others have fruitlessly tried to escape them; either way, these spots are some of the most haunted bookish places on earth. These are a few haunted libraries within the U.S. where unsettling paranormal activity has been charted. You can make a road trip post-pandemic to check them out for yourself!

While some establishments would be eager to kick out paranormal guests, Willard Library considers its resident ghost, known as the Grey Lady, to be a near-celebrity. In fact, this little library branch in Evansville, Indiana takes their ghost sightings with pride, even offering an information page and Grey Lady Ghost Tours for the whole family. So, who is the magic phantom that the workers of this gothic library (the oldest in all of Indiana) admire so much—and how has she become one of the most well-known library ghosts in the world?

In 1937, the Grey Lady began to make appearances in the library building. While she doesn’t always show up as the image of a normal woman, she makes sure her presence is felt in other ways. Walking through cold spots in the air and smelling the scent of her perfume is all normal for patrons of the library to experience, and all indicate that the Grey Lady is close by. In more extreme cases, the Grey Lady has been known to throw things off of the library shelves, move furniture, mimic typing noises, trigger the elevator, and manipulate technology in her reach. Essentially, she’s like a paranormal toddler, and she has a blast wreaking havoc in between Willard’s shelves. Fortunately, the library workers love the chaotic ghost. She’s been featured on numerous ghost hunting shows and podcasts (including Ghosthunters), yet the staff of the library has never asked any visiting guests to try to remove her spirit. The library also set up several webcams throughout the library to try to catch some of the Grey Lady’s infamous appearances on tape, which helped gain the building national web attention. Ultimately, Willard Library seems pretty satisfied with its haunted reputation. If you find yourself in Indiana, it might be worth stopping by for a tour. If you can’t make it out anytime soon, be sure to get a copy of ‘Rebecca’ by Daphne Du Maurier here to read about a haunted woman whose presence on a property demands attention as much as the Grey Lady.

This little library in Green River, Wyoming has all the makings of a ‘Goosebumps’ book. The building was built on top of a cemetery, in case you wanted to know what their first mistake was. Ever since its conception, Sweetwater County Library has been a host to a number of paranormal phenomena, so much so that the staff has come to expect crazy stuff to happen on the daily. As soon as the library opened its doors in 1980, the staff began to experience electrical issues, witness weird optical light sightings, and hear strange noises (like shoes slapping on the floors) after hours. Back before computers were in every library, some of the typewriters would spring to life and clack on their own. Unfortunately, unlike in The Shining, there was no paper loaded in the reels, so the librarians never caught any messages from the ghosts. Still, this odd activity was such a typical occurrence that the librarians assumed the ghosts would always be active, even if they weren’t malicious.

But wait—it gets worse. One evening, a loaned librarian was working on a Geac terminal computer when something caught her attention and she turned away from the screen. When she spun back to the computer, she saw her name splayed out in massive letters across the display. She managed not to have an instant heart attack, and, after alerting her fellow librarians, they were able to get a look at the screen to verify her story.

Considering that Sweetwater was built on top of a former gravesite, this is probably one of the best spots to hit up if you are desperate for a paranormal bookish encounter. In the meantime, if you want to read haunting tales about buildings with some serious history, check out Silvia Moreno-Garcia’s gripping tale ‘Mexican Gothic’ here or Shirley Jackson’s infamous ‘Haunting of Hill House’ here.

Tucked away in Pendelton, Oregon is the Umatilla County Public Library, along with their resident ghost, Ruth. Before she haunted the halls of this establishment, Ruth was a character in the building’s narrative, working as an assistant librarian. She was also the head of the Eastern Oregon Library Association, so she spent plenty of time advocating for libraries to exist and serve the community. While Ruth gave her heart to the library, she likely didn’t expect to give her life to the place (or spend the afterlife in one).

On an October evening in 1947, Ruth was working alone at the Umatilla County Public Library when she suffered from a cerebral hemorrhage. Not realizing the nature of her medical ailment, Ruth made her way downstairs to rest, but soon found herself unable to move her limbs or cry out for assistance. It wasn’t until the next day that she was found by the wife of the custodian, who rushed her to the hospital. Unfortunately, she passed away within a few hours.

This is where things get creepy. The library (later renamed Pendleton Public Library and relocated to a different building) became a source of uneasy energy. Long-time patrons soon felt that something wasn’t right with the building. It may sound like something straight out of ‘Scary Stories to Tell in the Dark’, but the spirit of Ruth seemed to have been absorbed into the library, and her antics kept everyone on their toes. At one point, a janitor who was helping to paint the children’s reading area kept hearing the intercom relentlessly buzz, despite no one actively using the system. The theory became that Ruth was buzzing in from the basement to alert someone to the fact that she was injured. Spooky, right?

The library’s novel innards have since been transferred to another location, and Ruth’s haunted spot was transformed into the Pendleton Center for the Arts. Did she follow the books to the new location or did she stay put to amuse the patrons of the arts center? It might be worth taking a trip to this little library to find out. Until then, grab a copy of ‘House of Leaves’ by Mark Z. Danielewski to read about a frightening location that thrives on the people living in its walls.

Want to go ghosthunting within Texas? While there are plenty of haunted spots to visit in the massive state, you’ll want to add the Houston Public Library to your list. Julius Frank Cramer is the resident ghost of the Julia Ideson Building. Cramer worked as a security guard, gardener, and a custodian of the building, so he was almost always at work. He even listed the workplace as his address, living in the basement, and brought his dog, a German Shepard, to work with him. However, the most notable part about Cramer was not what he did at work, but what he played. Cramer was a skilled violinist, and he often played music on his breaks and after the library had closed its doors for the day.

After his death from a pulmonary hemorrhage, patrons of the library thought they would no longer hear from the musically-gifted custodian. However, some people began to hear a distinctive violin playing in the Julia Ideson Building. The tunes weren’t melancholy, but were rather upbeat and energetic, seemingly a sign of good-faith from the recently deceased Cramer. Present-day visitors still report the sounds of the violin from the building, along with the clicking of nonexistent dog nails on the floor. Cramer and his once-beloved pup spent their lives in the library, and from what visitors report, they have yet to leave. If you want a free concert from a ghost, make your way out to the Houston Public Library for a listen (but be sure to keep your voice down). And if you want to dive into a fictional tale of music, hauntings, and mysterious apparitions, check out Joe Hill’s ‘Heart-Shaped Box’ here.