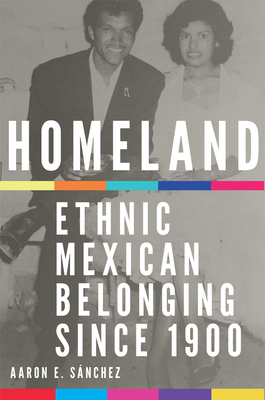 $24.95
Primary Author:
Sanchez, Aaron E.
Paperback
Publisher:
University of Oklahoma Press
Publication Date:
01/21/2021
Ideas defer to no border--least of all the idea of belonging. So where does one belong, and what does belonging even mean, when a border inscribes one's identity? This dilemma, so critical to the ethnic Mexican community, is at the heart of Homeland, an intellectual, cultural, and literary history of belonging in ethnic Mexican thought through the twentieth century. Belonging, as Aaron E. S nchez's sees it, is an interwoven collection of ideas that defines human connectedness and that shapes the contours of human responsibilities and our obligations to one another. In Homeland, S nchez traces these ideas of belonging to their global, national, and local origins, and shows how they have transformed over time. For pragmatic, ideological, and political reasons, ethnic Mexicans have adapted, adopted, and abandoned ideas about belonging as shifting conceptions of citizenship disrupted old and new ways of thinking about roots and shared identity around the global. From the Mexican Revolution to the Chicano Movement, in Texas and across the nation, journalists, poets, lawyers, labor activists, and people from all walks of life have reworked or rejected citizenship as a concept that explained the responsibilities of people to the state and to one another. A wealth of sources--poems, plays, protests, editorials, and manifestos--demonstrate how ethnic Mexicans responded to changes in the legitimate means of belonging in the twentieth century. With competing ideas from both sides of the border they expressed how they viewed their position in the region, the nation, and the world--in ways that sometimes united and often divided the community. A transnational history that reveals how ideas move across borders and between communities, Homeland offers welcome insight into the defining and changing concept of belonging in relation to citizenship. In the process, the book marks another step in a promising new direction for Mexican American intellectual history.
Price: $24.95
San Antonio Book Festival Books:
Adult Nonfiction