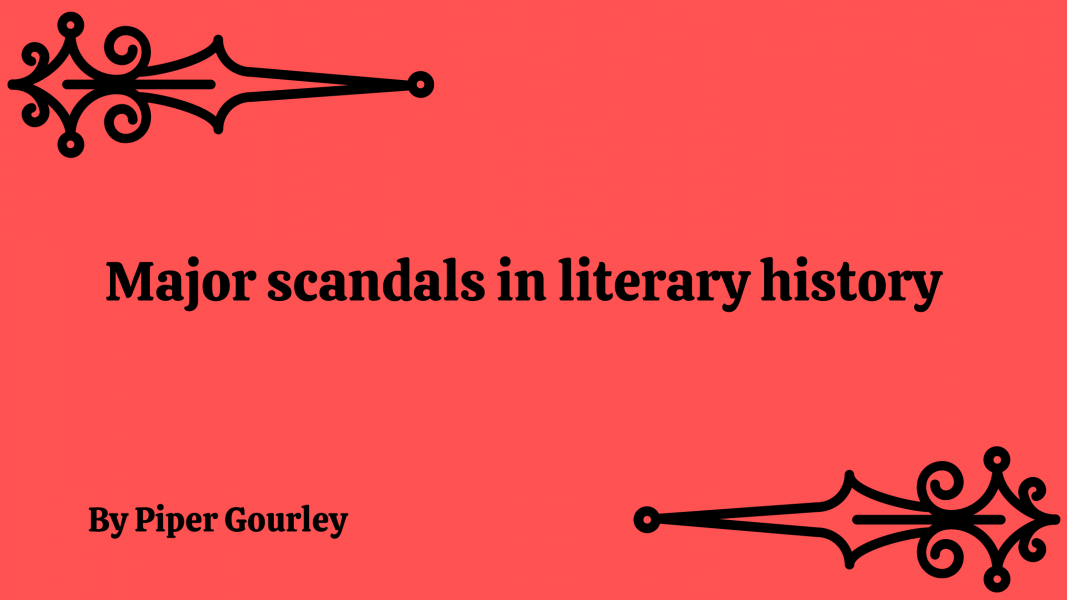 When people think of literature, the concept of scandals, lawsuits, and crime isn’t typically the first thing to pop into their minds. However, the literary world is more than the work it produces. Plenty of the strange trials of authors have made a splash in the pond across the years, particularly those that have turned into dramatic webs of plagiarism, miscommunication, and forgery. These are a few of the major scandals within the writing and publishing industry.

The tale of Lee Israel’s forgeries may be one of the most significant in the literary world. Before her downward spiral, she worked as a biographer, yet, when popularity for her books began to decline, she had to find another way to make a living. Her sick cat’s vet bill triggered the start of her crime spree. She went to the library, stole a couple of letters from Fanny Brice, and sold them off. Once she realized how much these types of letters were worth, especially with an autograph (and with content that might stir the pot of entertainers’ lives), she started to sign and embellish them, too. Soon, she was writing her own letters from numerous dead authors and actors, spicing up their lives with her biographical skills.

For three years in the 1990s, Israel racked in a tidy fortune penning and signing letters by famous authors, literary greats, and entertainers. Thanks to her charismatic personality and convincing persona, sellers rarely asked questions. She got away with imitating dead authors such as Dorothy Parker, Edna Ferber, Noel Coward, and Ernest Hemingway. In the end, she completed 400 of these embellished letters before she was caught by the FBI. The lead FBI detective on her case, Carl Burrell, called her “brilliant.” Nowadays, Israel keeps a low profile, yet her letters still garner attention. She told NPR, "It has come to my attention that some of the letters are now on the market as Lee Israel's forgeries. ... My work has received some attention and marvelous reviews, and people have liked the letters. And so they're salable, apparently.”

The tale of Israel’s forgeries (adapted from her memoir) was highlighted in the film ‘Can You Ever Forgive Me?’ starring Melissa McCarthy.

The lawsuit against Augusten Burroughs’ ‘Running with Scissors’

One of the most popular memoirs of the early 2000s was Augusten Burroughs’ ‘Running with Scissors’ (2002). The zany memoir follows Burroughs’ unique childhood after his mother, suffering from delusions, gave him away to be raised by her strange psychiatrist. The witty, insightful, and (at times) hilarious narrative stole the hearts of readers, yet it didn’t sit well with the Turcotte (a.k.a. “Finch”) family. They accused Burroughs of spicing up and fictionalizing details of their lives to make his story more interesting. However, Burroughs denied their allegations and even gave himself credit for maintaining their privacy. In an interview with David Shankbone, Burroughs shared:

Read Burroughs’ newest novel on his mother and witchcraft, ‘Toil and Trouble,’ here.

It’s no surprise that Emma Cline’s breakout novel ‘The Girls’ (2016) became an instant bestseller. The captivating narrative explores the trials of the teenage years of a unique group of characters. The grace with which Cline approaches the semi-violent narrative had readers eager to read more from the author. It came as a shock when, in 2017, a man named Chaz Reetz-Laiolo publicly sued Cline for plagiarism for installing invasive spyware on his computer to steal his personal information for her novel. Cline countered his suit, saying that Reetz-Laiolo was an abusive ex-boyfriend who was attempting to manipulate her with threats of defamation to get money out of her newfound success. Although she did install spyware on his laptop, it was to keep tabs on his emails to see if he was cheating on her, not to rob him of his intellectual property.

Ultimately, despite denying allegations of plagiarism, Cline was forced to remove a handful of lines from her final book that Reetz-Laiolo claimed was inspired by a screenplay he was working on and other personal info on his computer. While his larger suit didn’t hold water, Cline is deeply regretful for the time she lost having to chase her abusive ex in circles. Cline told the New York Times, “What should have been a happy milestone—publishing my first novel—has turned into a yearslong nightmare...I’ll never be able to get back the years I’ve now spent responding to an ex-boyfriend’s baseless legal assaults and ludicrous, billion-dollar claims instead of writing another book. That’s a loss I don’t know how to fully comprehend.”

Bob Dylan stole from Sparknotes for his Nobel speech

When Bob Dylan won the Nobel Prize for Literature, it came as a surprise to some. How had a country musician won the greatest award in literature? Most fans agreed that he was awarded the prize for his thoughtful lyrics, which was something that critics could settle on. However, the literary world wasn’t too happy with the Nobel lecture that followed.

Dylan didn’t attend the award ceremony, yet to receive the $900,000 award that accompanies the prize, he needed to give a lecture. He was invited to speak at the Swedish Academy in Los Angeles. Rather than coming up with original content for his lecture, Dylan supposedly plagiarized ‘Moby Dick’ (1851) throughout the speech, after mentioning the novel as an influence. Not only did he seem to plagiarize the book; he plagiarized the SparkNotes version. Fellow writers weren’t all too happy. Joni Mitchell called Dylan “not authentic at all,” while writer Ben Greenman, who noted that Dylan had made up a line from the book, said, “It appears, from all available evidence, that Dylan invented the quote and inserted it into his reading of Moby-Dick.” However, considering he cited the books in his speech, it doesn’t seem that Dylan was trying to hide anything.

Martin Amis is a renowned writer, so there’s a minimal chance that anyone could get away with plagiarizing his work. But what are the chances you’ll get caught by Amis himself? Author and television writer Jacob Epstein wrote his debut novel ‘Wild Oats’ (1979) during his senior year at Yale. Although he received pleasant reviews for the work, one of his reviewers, caught an unsettling detail: Epstein had stolen from his book, ‘The Rachel Papers’ (1973).

His theft of the text went beyond correlated events in the novels. The similarities were so striking that they caught the attention of the author before anyone else. Amis sat down to read the young writer’s work and found close to 50 similarities between his novel and Epstein’s. He pointed this out in his review, and eventually, he got an apology from Epstein, who claimed to not realize just how much he had stolen from the book that had inspired him.

Epstein said, “I returned to New York for the publication of 'Wild Oats' and one evening got down from a closet a carton of old papers and notebooks, that certain phrases and images in my novel, which I had through were original...come verbatim, or nearly verbatim from ‘The Rachel Papers.’”

This author did jail time for this memoir (and it wasn’t a true-crime novel). Writer Clifford Irving wrote ‘The Autobiography of Howard Hughes’ about the wealthy media mogul and aircraft developer who became one of the richest men in the world. He had a tidy advance lined up for the novel (to the tune of $765,000). However, while Irving’s publishers were under the impression that Hughes had been communicating with Irving (thanks to forged letters and fake call transcripts), Irving hadn’t spoken a word to Hughes. Hughes also never gave permission for Irving to write about his life, nor did Irving organically find out anything about Hughes’ life. Much of Irving’s manuscript was falsified and wildly incorrect information, with only certain details ringing true from Irving’s knowledge of Hughes’ closest partner.

Why did Irving think he could get away with making up Hughes’ life? Hughes was widely known for being reclusive, so Irving didn’t expect him to come out of the woodwork to make a fuss about his book. Unfortunately, Hughes did make a fuss...enough of a fuss to land Irving in jail. Irving spent 17 months behind bars for his defaming work. For Irving, it wasn’t all a waste. After getting out of jail, Irving wrote an entirely separate novel on his personal experiences of fabricating the memoir and being incarcerated. This book, ‘The Hoax’ (1981), received great critical attention and was interesting enough to be adapted into a film.