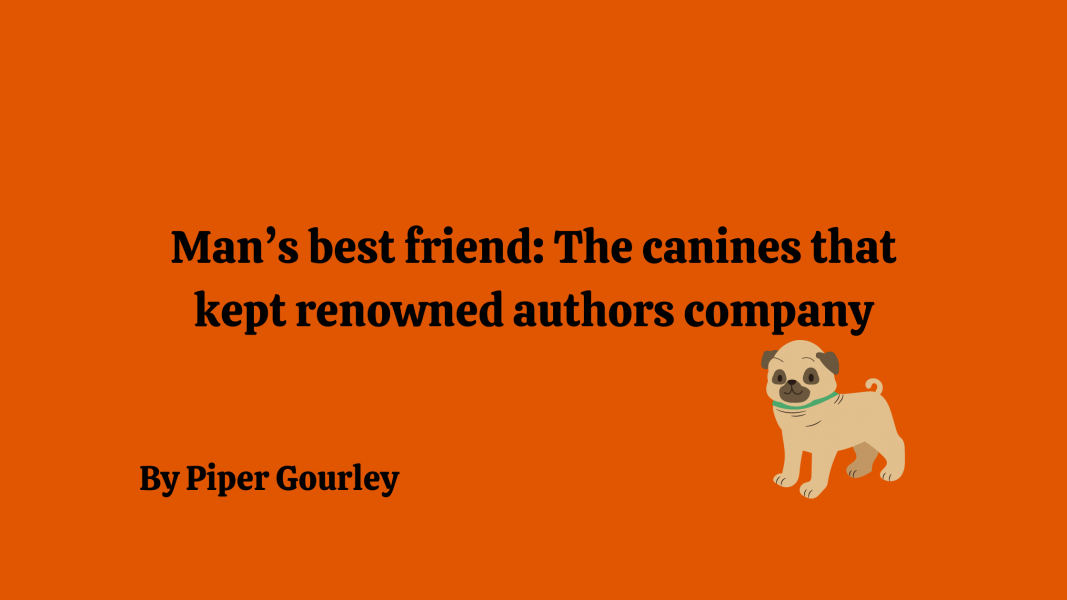 While writers are often portrayed as solitary creatures, most writers need at least some form of companionship to get them through their days. Plenty of famous authors have turned to dogs to fill this gap. Dogs are the perfect companions for writers: they have no criticisms, no judgments, and rarely interrupt their writing streaks (except for a cuddle or a treat). They also help show their humans how to have fun and enjoy the day once they’ve stepped away from their typewriters, pens, and computers. These are a few of the lovely canines that authors have kept at their sides while writing.

This satirical sci-fi writer had a soft spot in his heart for a very tiny canine. Pumpkin couldn’t have weighed more than ten pounds, but she took up plenty of space in Vonnegut’s life. From the photographs of the two pals, Vonnegut can be seen frolicking with Pumpkin on the beach, snuggling with Pumpkin on his couch, and pondering existence with the dog by his side. The joy on his face when he was around Pumpkin was palpable. The shaggy pup even made their way onto an early edition of his autobiographical ‘Palm Sunday.’ It’s clear that Vonnegut had a general adoration for the boundless love of dogs. In his book ‘Slapstick,’ he wrote, ‘I cannot distinguish between the love I have for people and the love I have for dogs.’

Pick up a Vonnegut novel from our shelves, here.

Wolff had a deep appreciation for Cocker Spaniels. She loved them so much that she wrote an entire book told from the P.O.V. of Elizabeth Barrett Browning’s Cocker Spaniel, entitled ‘Flush.’ It’s no surprise that she ended up with one of her own, a gorgeous pup named Pinka. Pinka was born to Pippin, a dog owned by Vita Sackville-West, who was one of Wolff’s favorite people (and her hidden romantic interest). Although Wolff had owned and cared for other dogs before, including a pup belonging to a soldier off at war, she formed a deep emotional bond with Pinka. She was photographed frequently with the gorgeous pup, lounging outdoors, going on walks, and even posing for family photos with Wolff and her husband. Wolff once said, “This you'll call sentimental—perhaps—but then a dog somehow represents...the private side of life—the play side.” Clearly, her pup was a source of relief for the hard-working writer.

Check out our online selection of Virginia Wolff novels, here.

Stephen King//Molly (a.k.a. the Thing of Evil)

Stephen King had plenty of books with cats on the covers (‘Pet Sematary’ and ‘If It Bleeds’ among them), but he has a special place in his heart for a dog. Molly, a.k.a. the Thing of Evil, might be the most well-known of the dogs on this list. Not only does Molly belong to the most prolific male horror writer of the last century, but she is also Internet famous, thanks to her looming presence on Twitter. The itty-bitty corgi has gained quite a reputation for her supposedly evil origins and cursed behavior (hence, “Thing of Evil”). King has created a hilarious series of tweets about Molly, remarking on all of her thrilling activities and random misadventures. He has also documented the ways that Molly has terrorized society, including tearing apart various victims (stuffed toys), plotting ways to take over the world, and sleeping with her “ears up,” as evil must do. Alongside one picture of Molly staring up at King with her mouth open, King wrote, “Molly, aka the Thing of Evil, prepares to eat the entire State of Maine. This takes villainy to a new level.”

Check out our frightening collection of Stephen King novels, here.

Stein, like Wolff, had an affinity for one type of dog: white poodles. Basket wasn’t a singular dog but was rather a series of three white poodles, all of the same name. Stein and Alice B. Toklas were the proud owners of these pups. The first in the series was purchased by Toklas, who named him Basket because she thought he appeared so regal that he should carry a flower basket in his mouth. Stein immediately fell in love with the dog and took to bathing him daily, having him run in circles in their yard to dry. When he died, they immediately hunted for a replacement to fill the hole in their lives. Basket II came just before the Second World War, and, had he not been a purebred, he would’ve been banned from eating by the Nazis. Fortunately, being a purebred poodle, he survived and remained one of Stein’s closest companions. Toklas wrote about the bond between Stein and Basket II, saying, “Basket, a large, unwieldy white poodle, still will get up on Gertrude’s lap and stay there. She says that listening to the rhythm of his water drinking made her recognize the difference between sentences and paragraphs, that paragraphs are emotional and sentences are not.”

Grab a copy of Stein’s exceptional ‘Autobiography of Alice B. Toklas,’ here.

Steinbeck’s greatest love, other than his wife, seemed to be Charley. Charley, a massive poodle, went everywhere with Steinbeck, from the writer’s chair to outdoor interviews. He wrote an entire novel about his road trip with the beloved pup called ‘Travels with Charley,’ a sixteen-week account of a blissful adventure exploring the countryside with his well-mannered canine. Charley gave him peace of mind on the road. The pup was “a good watch dog—has a roar like a lion, designed to conceal from night-wandering strangers the fact that he couldn’t bite his way out of a cornet de papier.”

Toby, on the other hand, was the problem pup. In fact, he ate the first draft ‘Of Mice and Men.’ Yes, you read that right. He ATE the manuscript. Steinbeck had to rewrite the entire book from start to finish. Fortunately, he was able to talk about it as if it weren’t a life-shattering loss, saying, “Minor tragedy stalked...My setter pup, left alone one night, made confetti of about half of my book. Two months work to do over again. It sets me back. There was no other draft. I was pretty mad but the poor little fellow may have been acting critically.”

Despite this bizarre behavior from Toby, Steinbeck’s love for his dogs never wavered. They provided him with a special companionship that he didn’t find in people. Steinbeck admitted that he often read his work to his pups before sharing early text with anyone else. What better critics than those who will chew up your work yet love you unconditionally?

Grab an uneaten copy of ‘Of Mice and Men,’ here, or any of our other Steinbeck novels, here.