My Stories, All True: J. David Bamberger on Life as an Entrepreneur and Conservationist 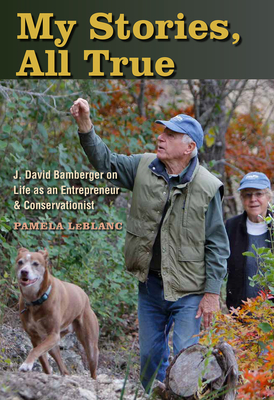 J. David Bamberger has been profiled in the New York Times and the New Yorker, interviewed on NPR, and featured in a National Geographic video. He and his Texas Hill Country ranch have been the subject of many articles and two books published by Texas A&M University Press.

In My Stories, All True, Bamberger, now in his nineties, tells the story of his life as an entrepreneur and conservationist in his own way. He recounts to journalist and friend Pamela LeBlanc how he made a living as a vacuum cleaner salesman, struck it rich as a partner in a wildly successful chain of fried chicken restaurants, and bought, then brought back to life, the “sorriest piece of land” in Blanco County, Texas—the rural oasis he calls Selah, Bamberger Ranch Preserve.

For more than a year, Bamberger and LeBlanc roamed the preserve—five thousand acres nursed back to environmental health with money earned from the sale of Church’s Chicken—as Bamberger reminisced about losing his father in a steel factory accident; gathering mushrooms to sell to neighbors when he was a kid; making a living as a door-to-door salesman; running a multimillion-dollar restaurant business; rubbing shoulders with the likes of Sam Walton, Jane Goodall, and Lady Bird Johnson; and, finally, turning to his land for the work that has earned national acclaim.

With a storyteller’s flair and insightful commentary from LeBlanc, Bamberger shares the tales of a remarkable life—as a resourceful country boy, a savvy entrepreneur, and a consummate conservationist whose vision has set the standard for the restoration of nature on private lands worldwide.