Novels that predicted the future better than ‘The Simpsons’ 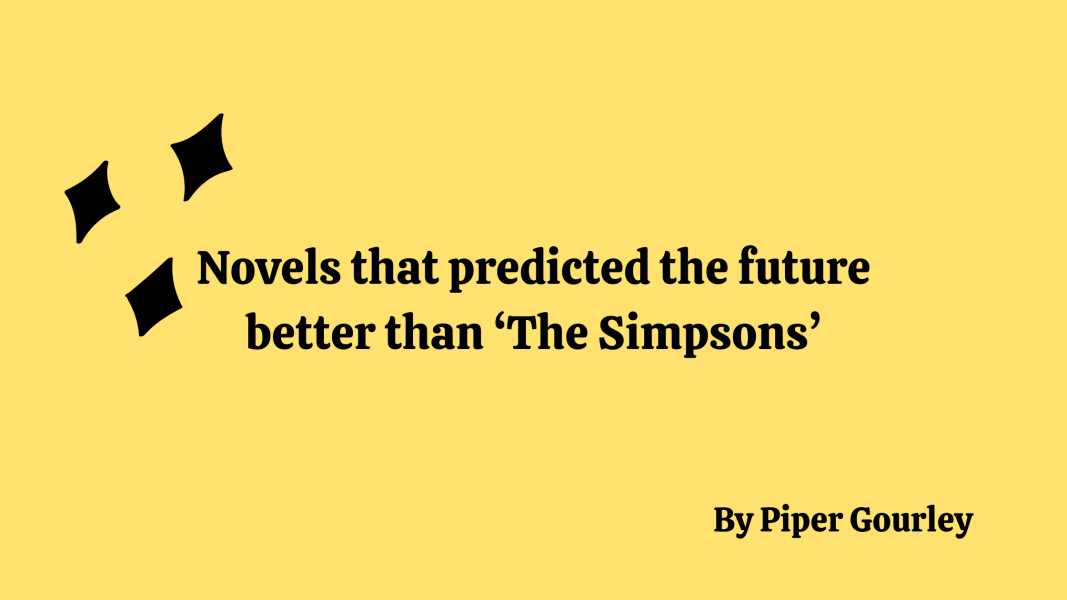 While time travel may be a futuristic concept, a number of predictions in shows, films, stories, and other forms of art have since come to fruition. Amongst the many unexpected forecasts that have become modern realities, multiple novels have accurately predicted events of the near and distant future. These authors may not have realized it when writing their best-sellers, but the worlds they created went far beyond fiction. These eerie manifestations make it tough to dispute the possibility of time travel. These are a few of the books that have predicted real-world technology, social movements, and other phenomena that later transpired. Creepy or coincidence? You’ll have to decide for yourself.

This satirical YA novel explores an uprising within a dystopian society through a refreshing lens, imagining how the digital age would alter the world. Anderson’s eerie book was released in 2002, before Facebook, Twitter, Instagram, or even MySpace were invented. However, his novel was centered around a technological “feed” where people could freely share their own personal media. Additionally, the feed showed them advertisement material from corporations who identified their shopping interests from the type of info they shared online. Does this strike a note? This practice is a present-day reality for most media sharing sites, who tailor advertisements directly to consumers who search or post anything related to sellable content. The creators of hit social media platforms almost certainly took notes from ‘Feed’ when putting together their data-sharing hot-spots. Anderson has since written other dystopian novels, but only time will tell if the events of those books come to fruition.

In an interview with The Hub, M.T. Anderson shared: “I wrote [Feed] back in 2001, and, in my mind, it was actually already about the world I saw back then: a world where I didn’t even have to have a chip installed in my skull—I already heard the voice of advertising all the time, speaking in my thoughts and dreams...Technological experimentation is making “feeds” more possible every day, at a speed that I find somewhat surprising and disconcerting.”

If you want to experience the spooky similarities for yourself, get a copy of M.T. Anderson’s ‘Feed,” here.

A philosophical comedy from the brilliant mind of David Foster Wallace, ‘Infinite Jest’ is great fun for any reader. This insightful book is fixated on examining how humans, in their “pursuit of happiness,” interact with sources of entertainment. Although the novel was regarded as pure dystopian fiction and social satire when it was released in 1996, many of the book’s technological innovations and cultural developments have come to exist beyond the pages.

One of the technological advancements that DFW predicted was video-calls (like FaceTiming and Skype), called “videophony” in his narrative. In the novel, videophony was popular for a short time but quickly fell out of style due to the pressures of having to primp up to look good onscreen. Nowadays, video-calls are a reality that doesn’t seem to be headed out of our culture anytime soon (with a recent uptick in these calls due to the pandemic’s inability for face-to-face visits).

The rise of the “selfie” (and selfie anxiety) was also alluded to in Foster’s book, with what is the modern-day equivalent of FaceTune also earning a space in the pages. Foster explained that people don’t like seeing their faces blown-up on a screen, as cameras distort the features that cause human insecurity. The book offered a tantalizing alternative to this problem: “High-Definition Masking.” Like a modern photo-filter, this masking would allow tech and cosmetic companies to create a “wildly attractive” version of a video caller’s face on their screen. FaceTune and similar apps—as well as Snapchat filters—meet a similar demand in the 21st-century. Foster may not have been entirely correct about advancements in American tech, yet he never doubted the power of human vanity.

Get your hands on Foster’s hilariously unsettling ‘Infinite Jest,’ here.

Although the year 1984 might not have been quite like George Orwell’s vision, his view of the future as a surveilled, technologically-draining landscape is relevant to the here-and-now. ‘1984’ predicted a number of life-altering shifts in power and technology. Although the suffocating surveillance of “Big Brother” may not exist outside of Orwell’s novel, surveying technology has certainly found its way into our daily lives, including data-sharing from our internet and media use. The “telescreens” in Orwellian dystopia (televisions controlled by the government that read human behavior and broadcast messages to the public) are mirrored by modern-day facial-recognition software and health-tracking programs. The voice-to-text transcription “speakwrite” devices from the novel are replicated in the form of phone apps and computer software, which have become more skilled at transcribing the human voice to coherent transcripts.

In addition to predicting these advancements in day-to-day technology, Orwell managed to hit the nail on the head regarding one of the most significant (and semi-frightening) advancements of the 21st-century: artificial intelligence. In ‘1984,’ Orwell refers to a piece of tech called the Versificator, which creates art with no input from human artists. Sound familiar? AI in our modern era has been able to meet and surpass these standards, creating auto-generated scripts, stories, music, artwork, and even memes. Fortunately, it’s unlikely that AI will ever create anything of such substantial artistic merit that it will eliminate the need for musicians, artists, and novelists to continue creating their passionate work.

There’s plenty more futuristic content to unpack from Orwell’s book. Get your copy of ‘1984’, here.