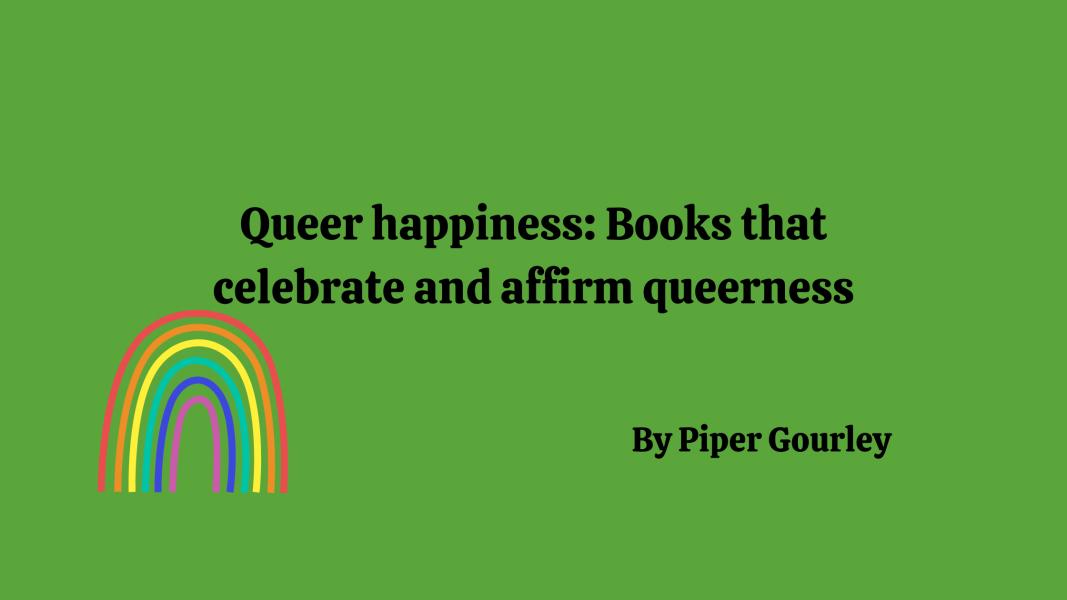 Queer representation in literature is important, and the presence of queer joy is especially essential: narratives that promote the potentials for happiness and self-assurance that come with embracing one’s identity, finding radical love, and surrounding oneself with a support system that accepts them as they are. LGBTQ+ rep does more than give queer folks confidence and normalize queerness in fiction and nonfiction narratives. Queer books can also be life-changing (and life-saving) for those who struggle to celebrate their identity or find acceptance in their own lives. Whether you’re looking for a romance novel or a sci-fi epic, the lovely novels on this list promote queer joy, hope, and identity. Here are a few awesome queer novels that put joy, self-acceptance, and optimism front and center.

‘I Wish You All the Best’//Mason Deaver

This groundbreaking book from author Mason Deaver is an incredible account of coming to terms with being nonbinary in a world that often defaults to binary identities. The book’s protagonist, Ben De Backer, comes out as nonbinary to their parents at Christmastime. After they are kicked out, they are forced to move in with their estranged sister, Hannah, and her husband, Thomas. Fortunately, they both support Ben in acquiring new clothes, using their proper pronouns, and encouraging them to be themselves. In the spirit of avoiding any more heartache after their parents’ rejection, Ben decides to keep a low profile at their high school, deciding not to come out to anyone else. That is, until they meet Nathan Allan, a fierce friend-turned-crush, who changes their perspective on what is possible when you are true to yourself. This romance novel is as much about falling in love oneself as it is about finding love with the people who accept you just as you are.

NPR reviewer Alethea Kontis said, “the book Deaver needed to read was a particularly important one, one that explored nonbinary gender issues and queer life in a way that was gentle, yet real. I'm pleased to say that they accomplished that goal with flying colors, and the literary world is a better place for it...There is tragedy at the heart of this story, but there is also tenderness. Deaver shows us that love, like gender, is fluid and nonbinary.”

Get your own copy of ‘I Wish You All The Best,’ here, or pre-order their next book, ‘The Ghosts We Keep,’ here.

This graphic novel series is tender, funny, and unapologetically queer. The series is a great read for non-sports fans and sports fans alike, especially those who justly feel like there isn’t enough queer representation in sports fiction. ‘Check, Please!’ follows Eric Bittle, a young skater and vlogger, in his freshman and sophomore year on the Samwell University hockey team. Eric has to learn to adapt to the fast-paced environment of college sports, along with grappling with a crush that he has on his dreamy team captain, Jack. The author, Ngozi Ukazu, learned about the homophobic culture on the ice while writing about hockey at Yale, and she managed to craft a graphic series that is both authentic and optimistic. She challenges the homophobia that exists in hockey leagues, creating a character who is able to be himself in a traditionally non-queer space. You’ll find yourself cheering on Eric’s endeavors—romantic, sports, and otherwise—in every panel.

Kirkus Reviews wrote, “Based on a popular webcomic, this is a warm story with an irresistible protagonist, a clever supporting cast, and lively and plentiful game and practice scenes. There are many themes here: acceptance, standing up to fear, and finding your place, to name a few. Despite its episodic style, the humor and heart at the center of the story carry it through. The art relies on expressive facial shots to complement the snappy and sometimes-raunchy dialogue.”

Get your hands on ‘Check, Please!’, here.

This enchanting debut from Aiden Thomas centers Latinx trans representation like no book has before. ‘Cemetery Boys’ is also the first book featuring a trans protagonist that has made it onto the NYT Bestseller list. The protagonist, Yadriel, is desperate to get his traditional Latinx family to accept his true gender. He decides that the best way to earn their respect as a young man is to prove himself as a brujo. When he tries to summon the ghost of his murdered cousin, he accidentally summons Julian Diaz, a school-aged bad boy who wants to understand the details of his death (and get a bit of revenge). At first, Yadriel is upset and wants Julian to go, yet he grows closer to Julian throughout the novel, as well as finding empowerment in his own identity and spirit. The relationship between Julian and Yadriel, strong enough to span across a spiritual boundary, will steal your heart, along with Yadriel’s steadfast spirit and swelling confidence. The plot is phenomenal, and the characters are simply electric.

Publishers Weekly wrote, “In Thomas’s vibrant YA debut, Yadriel, a gay, trans 16-year-old, is determined to prove himself, as a brujo and as a boy, to the traditional brujx cemetery community he grew up in...Thomas marries concept and execution in a romantic mystery as poignant as it is spellbinding, weaved in a mosaic of culture, acceptance, and identity, where intricately crafted characters are the pieces and love—platonic, romantic, familial, and communal—is the glue. Though the puzzles that Yadriel unravels can be guessed, the emotional journey is worth every step.”

Get your hands on a copy of ‘Cemetery Boys,’ here.

From Adam Silvera (author of ‘Infinity Son’) and Becky Albertalli (author of ‘Simon vs. the Homo Sapiens Agenda’ and ‘Yes No Maybe So’) comes a queer love story that is dripping with heart. A New-York summer vacationer (and hopeless romantic) named Arthur runs into a native New Yorker, Ben, at the post office, where Ben is depositing a box of his ex-boyfriend’s belongings. Their brief interaction seems like the start of something new, and, when they are reunited, Arthur hopes for the Broadway-romance date of his dreams, while also being forced to grapple with the fact that reality doesn’t often line up with fiction. With charming characters and alternating P.O.V. chapters, this book truly lets you get to fall in love with two awesome people as they find love and heartache in one another.

Reviewer Kaitlin Frick wrote, “Becky and Adam are clearly two of the most talented YA authors currently on shelves, and none of that brilliant shine is lost here. Arthur is so optimistically upbeat, a purely glass-all-the-way-full kind of person. (If you’ve read ‘Check, Please!’ and love Bitty, Arthur is going to be your kind of guy.) And while Ben so clearly sees the universe as his worst enemy, he can’t let go of the happiness and light Arthur’s brought to his city and life. The dialogue is snappy, the characters funny yet relatable, the plot just twisty enough to keep you guessing.”

Get your very own copy of ‘What if it’s Us,’ here.

Casey McQuiston’s debut novel received immense critical acclaim, and for good reason. This heartfelt, funny, and engaging YA novel is one of those books that is a non-put-downer. The narrative centers Alex Claremont-Diaz, whose mother was elected president of the U.S., and Prince Henry of Wales, a royal from across the pond. The boys get into some royal trouble after an online feud strains their countries diplomatic relations. In an effort to fix the conflict they’ve stirred up, they stage a fake friendship on Instagram, yet their faux relationship soon develops into a very real romantic connection between Alex and Henry. With plenty of teen angst and surprising optimism, you’ll be grinning through every tender and funny moment within McQuiston’s pages.

Harrison Hill with the Los Angeles Review of Books wrote, “Indeed, part of the book’s pleasure is in its unabashed willingness to be conventional—all while taking the decidedly unconventional tack of casting two men as the central romantic leads. How satisfying it is to watch McQuiston broaden the archetypes available to gay and bisexual men: in her world, we can be as fun and frivolous and flighty as, say, Bridget Jones or Carrie Bradshaw or even Elizabeth Bennet. We, too, can have heartbreaks, crushes, and ridiculous confrontations in the rain; and if, in Red, White & Royal Blue, there’s something silly and calorie-free about that performance, well then, so be it: equality means having access to every type of narrative, from the weighty to the frivolous.”

Snatch up your own copy of McQuiston’s ‘Red, White & Royal Blue’, here, or pre-order their next book, ‘One Last Stop,’ here.

For all those who are sci-fi and fantasy fans, you don’t want to miss ‘Once & Future.’ The world that Amy Rose Capetta and Cori McCarthy have created in this novel is occupied by LGBTQ+ characters, making it a refreshingly queer fantasy. The novel is a futuristic retelling of King Arthur and his knights—with a queer, teen female protagonist leading the reigns. As teenager Ari Helix tries to save the universe from a curse, she finds herself pulling that sword from a rock, reincarnating as King Arthur, and pairing up with a now-teenage Merlin to break the Arthurian curse and restore goodness on earth. This clever book has all the action of a traditional sci-fi novel while also exploring queer romance, the genderqueer identity, and other features of being LGBTQ+. Adventurers at heart will fall head-over-heels in love with this narrative and the fiery characters at its core.

Liz Borke with Locus Magazine offered a glowing review, writing, “Once & Future is a hell of a romp. Fast, fierce, gender-bending, and gleefully playful both with the conventions of science fiction and with the conventions of Arthurian retellings, it makes up for its flaws with sheer enthusiasm, and I recom­mend it for its joyful exuberance alone: KING ARTHUR IS A QUEER GIRL IN SPACE LET’S JOUST DRAGON-ANIMALS!”

Grab your own copy of ‘Once & Future,’ here.