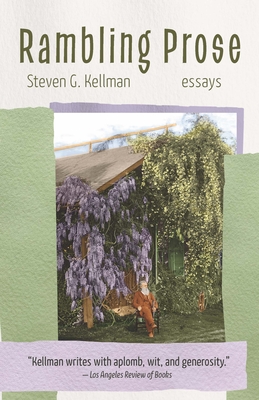 $24.95
Primary Author:
Kellman, Steven G.
Paperback
Publisher:
Trinity University Press
Publication Date:
11/17/2020
Rambling Prose is a collection of essays by Steven Kellman, culled from his lifetime of work on comparative literature, criticism, and film studies. Filled with wordplay and surprising insight, the collection demonstrates his range as an essayist and invites us to explore the human experience through refined literary analysis. Kellman explores such topics as animal rights, silence, mortality, eroticism, film, and language with his unique critical perspective and offers complex investigations of eternal human quandaries that raise more questions than they answer. Two original pieces complement the remaining twenty-six, which appeared in the Chronicle Review, the Hedgehog Review, Puerto Del Sol, and other publications from 1980 to 2016. Kellman's nuanced explorations of moments in history like the intersection of Camus and the HIV/AIDS epidemic in the United States or the combined comedy and tragedy of writers running for office challenge us to understand our world through the lens of good prose. His deft navigation of the implications of language helps parse the cultural impact of words in instances ranging from Pauline Kael's revolutionary film criticism to Esperanto's use in popular media. The intellectually curious will find validation and insight into favorite authors and critics, while those just approaching the literary world may be inspired to delve deeper. Witty and insightful, Kellman entertains and educates, pokes fun at institutions, and honors the contributions of those who have come before him. Rambling Prose is a book for anyone who loves language and believes in the power, both positive and negative, of words to change the world.
Price: $24.95
San Antonio Book Festival Books:
Adult Nonfiction