The strange superstitions that famous writers lived by 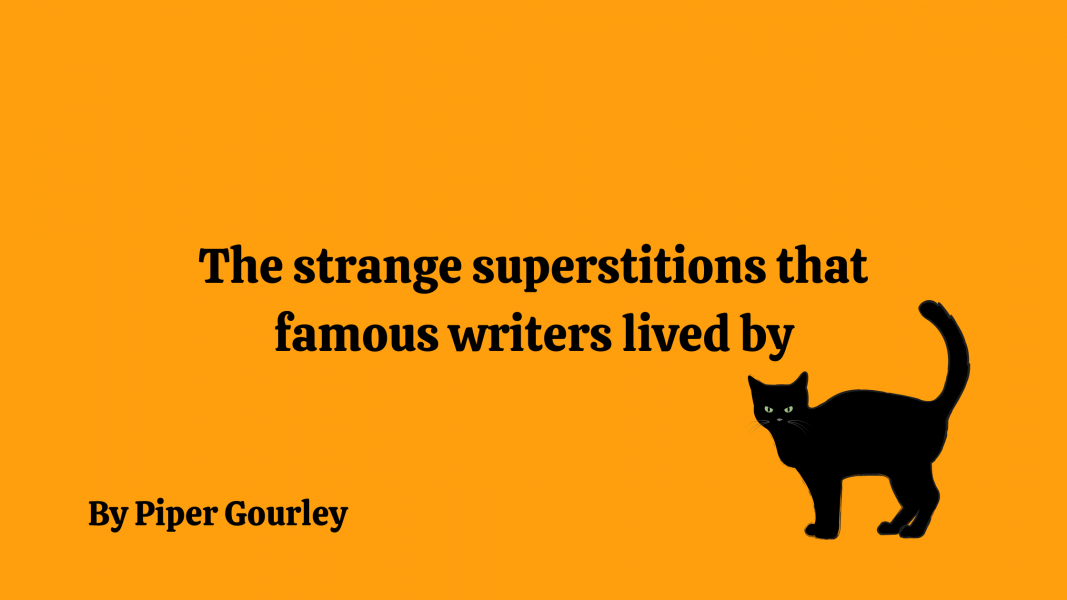 Most creatives have productivity habits that they stick to that help them produce quality work. They may prefer working at a certain spot in their home, writing on a certain kind of paper or device, or even need a certain drink, pen, or candle nearby to get their brains to activate. However, some writers have grappled with writing superstitions so intense that they are as driven by paranoia as they are by efficiency. These are a few fantastic writers whose strange superstitions have helped land them on the best-seller list. Hey, what works, works!

‘Green Eggs and Ham’, ‘The Lorax,’ and ‘Oh, the Places You’ll Go!’ are only a handful of the reading staples from this children’s author. With well over 60 publications to his name, Dr. Seuss (a.k.a. Theodor Seuss Geisel) is one of the most successful children’s authors in history. Even so, throughout his creative life, he wasn’t immune to the frustrating sensation of writer’s block. While every writer deals with this problem differently, Seuss had a unique solution to grappling with a lack of direction: hats. (And no, he didn’t put ideas into a hat and draw.)

Seuss had an impressive collection of hats, so many that they were stored in their own closet in his home. With over 100 at his disposal—of all shapes, sizes, colors, and patterns—they made a perfect accessory to help him cope with his writer’s block. Whenever Seuss was facing this predicament, he would withdraw one of these caps alongside his editor, Michael Friff. They would stare at one another in their quirky hats until the words returned to Seuss’s mind. The hats also found their way into many of the vibrant illustrations that fans associate with his books (‘The Cat in the Hat’, anyone?).

Following his death, his hats were put into a traveling art exhibition. One of the curators of the collection, Robert Chase, told Collector’s Weekly, “There are hats from Japan, there are hats from Southeast Asia, and there are hats from across Europe. There’s a sombrero in there that adorned the tequila bottle he got in Mexico. It’s a very worldly collection...I think he realized that hats have this amazing transformational quality about them. They could both transform somebody’s personality and amplify the personality someone already has.”

Get your hands on more of Seuss’ whimsical novels (many of which feature drawings of his beloved hats), here.

On January 8th, 1981, Isabel Allende wrote a letter to her dying grandfather that permanently altered the course of her life. The Chilean-American author eventually turned the message into an entire book, ‘The House of the Spirits,’ launching her career as a novelist. She has since completed and published numerous other works, including ‘A Long Petal of the Sea’ and ‘Daughter of Fortune.’ However, many don’t know that every single one of her books was started on the same day each year.

To mirror the book that gave her literary wings, Allende begins to draft all of her new novels on January 8th. If an idea comes to her at any time throughout the year, she still waits until that date to start drafting the book. Why? While it draws a touching connection with her breakout book, she has come to appreciate the practice for the fact that no one bugs her on that day.

Allende told Harvard Business Review: “At the beginning it was superstition, because the first book had been so lucky. Now it’s just discipline. My life is busy, so I need to save some months of the year to be in a retreat. I need time and silence, or I will never be able to write. Having a start date is good for me and everybody around me. They know that on January 8, I’m not available anymore.”

Check out the full breadth of Isabel Allende novels on our shelves, here.

Truman Capote: Everything under the sun

Truman Capote may have been more superstitious than any other writer (or celebrity) in history. He didn’t have just one superstition that he regularly returned to, but rather, he was paranoid across the board. His many superstitions and fears influenced both his writing practices and everyday behavior, to the point that he resented their presence.

One of the central superstitions that crept its way into his creative work was a refusal to start or finish any of his stories on Fridays. Whether or not he found the day unlucky is unclear, but either way, he steered clear of beginning or wrapping up stories on this day of the week. He was also only able to produce work when he was laying down, referring to himself as a “horizontal writer.” To successfully write in this fashion, he would complete the first two drafts of a story with paper and pencil, while the third was completed on a typewriter that he propped up on his kneecaps.

What about a few of his everyday superstitions? He refused to fly on an aircraft if more than two nuns were aboard. He also carried around a security blanket from his childhood, which brought his tumultuous mind a modem of comfort in a world he seemed to endlessly fear. Many of his superstitions were potentially linked to a lifelong struggle with obsessive-compulsive disorder. He seemed acutely aware of how much they weighed on his life. In an interview with The Paris Review in 1957, Capote shared:

“No, I don’t use a typewriter. Not in the beginning. I write my first version in longhand (pencil). Then I do a complete revision, also in longhand. Essentially I think of myself as a stylist, and stylists can become notoriously obsessed with the placing of a comma, the weight of a semicolon. Obsessions of this sort, and the time I take over them, irritate me beyond endurance.”

Grab a copy of the enthralling true-crime novel ‘In Cold Blood’ by Capote, here.