The strangest research authors have done for the sake of novels 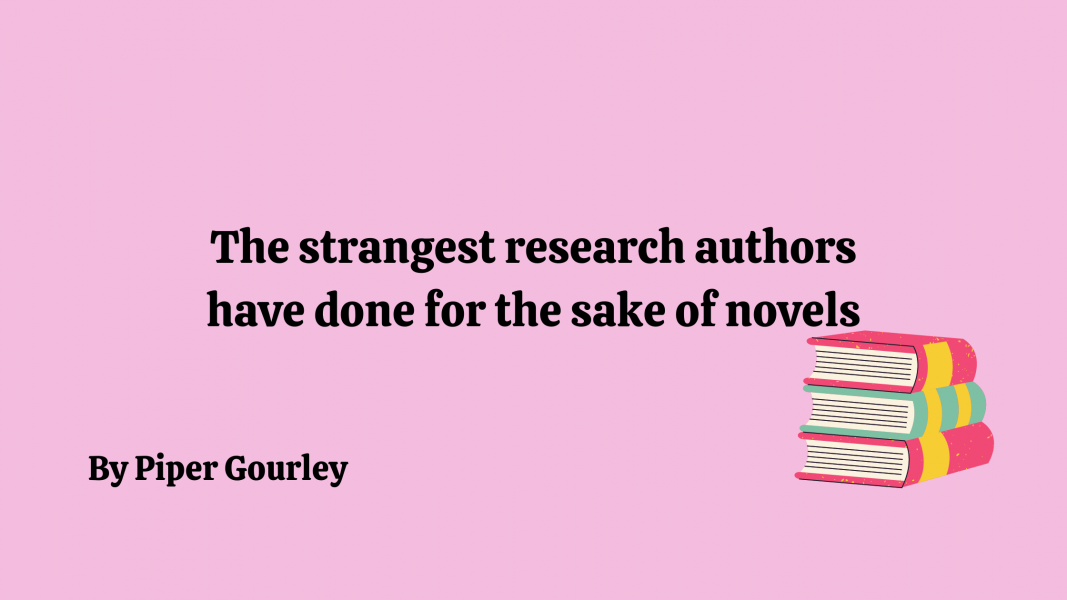 Writing is a fairly personal act, but authors also do plenty of external research when crafting their novels. Researching locations, hobbies, dialects, and other subjects that writers don’t have prior knowledge of is what helps make the culture of a book authentic. Many writers’ Google searches are littered with tabs like “how to bury a body in sand” and “can a hockey puck break an arm?” (all for books, we swear). Other writers travel to the places that their books are set in to get a good picture of the environment, or interview people who are going through similar experiences as their main characters. However, some authors have taken their research even further, going so far as to alienate themselves from society (and we’re not talking about Thoreau’s ‘Walden’). These are a few of the strangest ways that famous authors have collected research for their novels.

Hunter S. Thompson: Joined the real “Hell’s Angels” biker gang
It’s not a major surprise that that godfather of Gonzo journalism, and one of the weirdest writers in history, exercised some odd methods while collecting research for his most famous publications. He traveled all over the world throughout the course of his writing career, drawing inspiration from countless people, animals, and locations. However, one of the most significant periods of his research career happened in the states: the year he spent living with the Hell’s Angels biker gang. Talk about immersion!
While living and traveling with the group, Thompson learned all about the culture, bylaws, and attitudes of the Angels, including their perceptions on violence, strangers, and society as a whole. While in Hell’s Angels, Thompson got beat up a handful of times, once for pointing out abuses against someone else in the group. He came to recognize that the Angels were more upfront with an “evil” that all of society shared, albeit it to a violent degree. All this immersive research, of course, led to the ‘Hell’s Angels’ (1967) book, but the fact that he remained immersed in this exclusive community for so long is a marvel. In the aftermath, Thompson claimed that he became a “professional coward,” telling Blank on Blank:
“I can’t remember ever winning a fight. I don’t do it anymore because I’ve finally caught on to what was happening. Until you recognize it, it’s like an albatross around your neck. I learned a lot about myself just writing about the Angels. I was seeing a very ugly side of myself a lot of times. I’m much more conscious of the kind of anger that lurks everywhere...I keep my mouth shut now.”
Get your own copy of the uber-authentic ‘Hell’s Angels’, here, or grab another one of Thompson’s many odd and brilliant novels, here.

Beatrix Potter: Boiling rabbit soup, anyone?
While Beatrix Potter may have written one of the most beloved children’s books on the market, writing wasn’t her central passion. The tales of little Peter Rabbit robbing a farmer of his thriving crops resulted in hundreds of millions of book sales, but, first and foremost, Potter was interested in science. Sounds innocent enough, right? Well, in her younger days, she had a pretty specific way of conducting experiments: killing animals. Not only did she kill them, but she also skinned them and removed their flesh so she could get a better look at the skeleton of each kind of creature. Yikes. She had a massive collection of dead animals, from foxes to squirrels to reptiles. What about poor Peter Rabbit? Yep—she chloroformed him, a payback that the farmer in her books could only dream of. Once she had them boiled down, she converted her findings into drawings, which later served as the blueprint for the cuddly characters in her ‘Peter Rabbit’ books.
Before you get too horrified, she wasn’t a sociopath, just a scientist with an interest in animal biology. She never attended school as a child, so dismembering small critters was her science class, and the world was her laboratory. Still, imagining her book characters as creepy little skeletons is enough to give most readers nightmares.
Grab ahold of a non-skeletal edition of ‘Peter Rabbit,’ here.

Jodi Picoult: Everything you could possibly think of
When it comes to Jodi Picoult, the better question to ask is this: What kind of research has she not done? For Picoult’s many bestsellers, she did a massive amount of research, and her approach to collecting book data is as hands-on as it gets. For her book ‘Plain Truth’, she spent a week living on an Amish farm. She woke up at 4:30 a.m. to milk the animals, all the while, learning about the dimensional personalities of Amish people that are often neglected in modern representations. For ‘Change of Heart’, she visited Death Row in Arizona on two different occasions, studying the environment of one of the most clouded and twisted places on earth. Picoult throws herself into her research without hesitation, and it has led her on some wild and wonderful paths.
Picoult’s website boasts, “When I start researching, I read everything I can about a topic...These are some of the things I’ve done in the name of research: Watched Sly Stallone on a movie set (for Picture Perfect); observed cardiac surgery (Harvesting the Heart); gone to jail for the day (The Pact); milked cows on an Amish dairy farm (Plain Truth); learned Wiccan love spells and DNA testing procedures (Salem Falls); explored bone marrow transplants (Perfect Match); gone ghost hunting (Second Glance). For Vanishing Acts, I spent time in a hardcore Arizona jail, and met with both detention officers and inmates (learning, among other things, how to make my own zip gun and the recipe for crystal meth); and went to the Hopi reservation to attend their private katsina dances. For The Tenth Circle, I trekked to the Alaskan tundra to visit a remote Eskimo village and to follow a dogsled race on a snowmobile...For Lone Wolf, I spent time with a man who lived in the wild with a wolf pack for a year – and got to meet some other wolves he has in captivity. For The Storyteller, I spoke with the real-life head of the department of justice division that tracks down Nazi war criminals. For Leaving Time, I spent time in Botswana with elephant researchers, at an elephant sanctuary in Tennessee, and with Chip Coffey – a wonderful psychic! For SMALL GREAT THINGS I interviewed two former Skinheads – everything you read about Turk in that book actually happened to one of those two men. For A Spark of Light, I shadowed an abortion provider, observed multiple procedures, and interviewed 151 women who had terminated a pregnancy…as well as those who were pro-life.”
Grab a copy of Picoult’s ‘The Book of Two Ways’, here.

Charles Dickens: Became a member of ‘The Ghost Club’
Dickens’ most famous tale is one of three ghosts visiting a dying man, so it’s little surprise to know that Dickens had a penchant for the haunted. The author wrote many novels and short stories that centered and celebrated the dead, dying, and the returned. Although most of his most famous work was published before he joined an elite paranormal group, The Ghost Club was very well the guiding force of the final stretch of his career. Founded in 1862, The Ghost Club was a group of folks who came together in London who believed in the paranormal. The club is considered one of the oldest paranormal groups in the world. Dickens was a member from its earliest days, which makes it tough to believe that he wasn’t already involved in communication with metaphysical beings before the club earned its name. The group held séances and attempted to sort out the afterlife the best they could from planet earth. Was Dickens’ already involved in séances before the club popped up? It’s hard to say for certain, but based on his continual desire to return to the theme of death and hauntings, it’s fair to assume that his ghost-hunting aspirations drove his writing forward, as well as served as a point of research for him. He was highly interested in the scientific basis of hauntings, and even went so far as to attempt to debunk the false psychics at the séances, saying of one medium: “The seer had a vision of stalks and leaves, ‘a large species of fruit, somewhat resembling a pine-apple,’ and ‘a nebulous column, somewhat resembling the milky way,’ which nothing but spirits could account for, and from which nothing but soda-water, or time, is likely to have recovered him.”
Grab a copy of his mysterious, death-driven ‘Tale of Two Cities’, here.

Nellie Bly: Undercover in an 1800s asylum
Nellie Bly was a famous writer, philanthropist, and reporter, writing on everything from women’s rights to social injustices, all during the late 1800s. In other words, she was a feminist icon. What put her on the map, though, was her writings on the lives of patients in oppressive asylums. The accounts were extremely accurate, and not just because she had gotten some good interviews—she lived the conditions herself. In 1887, the journalist went undercover in a New York asylum, a place by the name of Blackwell’s, in an attempt to understand the injustices and abuses that occurred in the institution.
When Bly showed an interest in writing about asylum life, her editor suggested that she get herself committed to the institution for a 10-day stay. Bly was more than eager to comply. All in the name of writing, right? She spent money on a rented room at a boarding house and spent several days yelling in the streets, refusing to sleep, and getting herself fully prepared to be declared insane by the time she got to the hospital. The police were eventually called on her after she became rowdy outside of the boarding house. She was taken to Bellevue and diagnosed with a handful of ailments (including dementia) before being transferred to Blackwell’s.
At Blackwell’s, she lived like any other patient, experiencing the horrors of the hospital first-hand. She ate the moldy food, took cold baths, and experienced psychological abuse from the staff running the place. After 10 days, her editor managed to get her out, and, with notes she took during her stay, they began to piece together articles about the horrid conditions at Blackwell’s. These pieces became an influential touchstone when it came to changing the approach to mental healthcare and regulation of treatment facilities in the U.S. The articles also later turned into a full book, ‘Ten Days in a Mad-House’ (1887), which the public consumed like candy.
Pre-order a book on Nellie Bly’s incredible experiences, here.