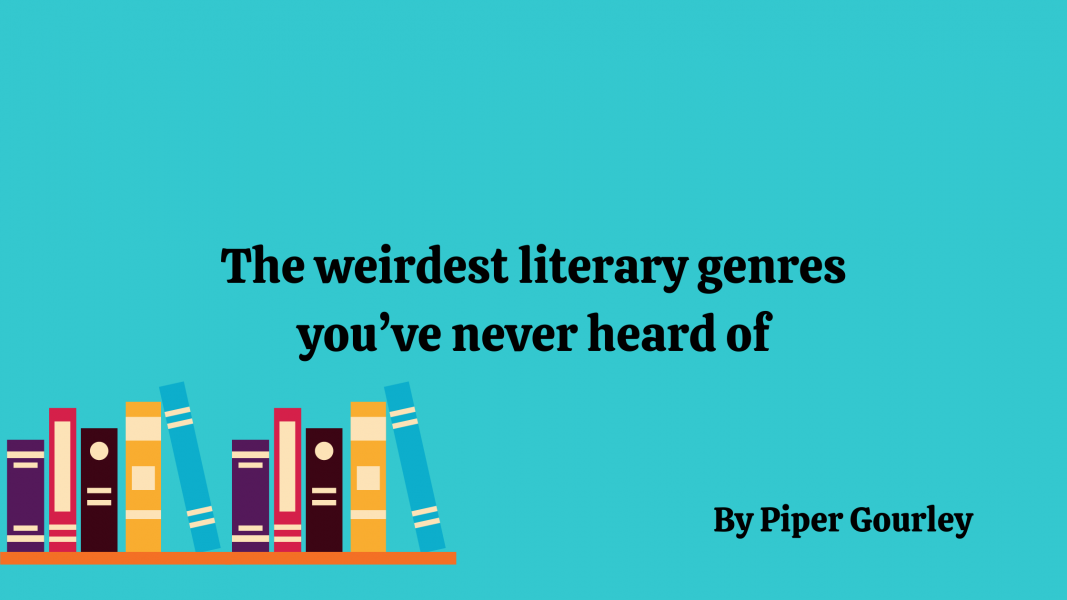 Horror, science-fiction, fairy tale, mystery—these are some of the common genres that help fans of specific narratives find the books that speak to them. But what about genres that are even more focused and strange? Across the years, new genres have evolved and taken shape to account for some of the more particular topics that appeal to certain writers and readers. These are some of the weirdest literary genres you’ve (probably) never heard of!

Although this type of writing has been around since the late 19th century, journalist and teacher Dan Bloom invented the term “cli-fi” to describe fictional work that deals with topics surrounding climate change. Plenty of books have some element of cli-fi in them, such as characters complaining about the crazy heat index in Texas or commenting on heavy rainfall in the area where the book takes place. However, books classified as cli-fi are centered entirely around climate change, global warming, ecological disasters, and related events. Dan Bloom told Five Books, “It can be speculative fiction. But it can also be literary fiction...It’s up to each individual writer to go where cli-fi takes them. There’s no canon, there’s no agenda, there’s no ‘school of cli-fi.’ It’s an open field. No rules.”

Many cli-fi books take place before, during, or after the occurrence of a natural disaster caused by climate change, such as a hurricane, flood, or tsunami. Jesmyn Ward’s powerful book ‘Salvage the Bones,’ which follows a Black family in poverty in Mississippi as they prepare for a hurricane, is one such example. Others note the more gradual or seeming subtle changes in ecology due to climate change, such as Barbara Kingsolver’s ‘Flight Behavior,’ which deals with the migration patterns of monarch butterflies.

Not all climate change books reflect on modern phenomena. Sometimes, cli-fi books look even further ahead, exploring what the world might look like after the progression of climate change. Margaret Atwood’s ‘Oryx and Crake’ looks at a nearly post-human world riddled with frequent natural disasters, and Octavia Butler’s ‘Parable of the Sower’ looks at a completely dehumanized world in 2025. There’s plenty of great cli-fi out there, so if you’re a fan of dystopian readings that face this topic head-on, be sure to check out all the epic novels this genre has to offer.

Writers of this genre sure know how to have fun! Bizarro fiction is, as the name implies, utterly bizarre. Writing that falls under this category dives into absurdism and surrealism, with satire often centering the narratives. Much of the work that is filed under this genre is considered “genre-bending,” as these works tend to break formatting barriers, dismantle plot structure, and disregard other typical writing conventions—because why not? If you’re going to commit to Bizzaro work, might as well throw convention to the wind. Fortunately, these works aren’t pure nonsense. Most are thoughtful, funny, and highly entertaining stories with strange elements driving or bordering the narratives. With weird names like ‘Space Walrus’ (2012) and ‘Satan Burger’ (2001), it’s tough not to want to crack open one of these books and see what’s inside.

Compared to other genres like horror and sci-fi, Bizarro fiction is fairly new on the scene. With its wide parameters (the only real requirement being weirdness), it is a harder grouping to define than more clear-cut genres. However, this only increases the entertainment value, as you never know what you might be diving into when you crack open one of these fascinating novels. So, what are some of the Bizarro books you can check out to see if this type of work might interest you?

One of the most popular Bizarro books on the scene is ‘John Dies at the End’ (2007). The book, which follows two hilarious college dropouts battling paranormal enemies to save the world, was adapted into a film in 2012. The sequel, ‘This Book Is Full of Spiders’ (2012), is also great fun. Carlton Mellick III, one of the most renowned Bizarro fiction writers, is releasing a new Bizarro fiction novel this coming September. If you like horror and absurdism, ‘The Bad Box,’ centering a box that punishes failing school students by turning them into monsters, is available for pre-order.

Most people know about steampunk, the fantasy genre that deals with aesthetic technology relating to the Victorian era. What about mannerpunk? Author Ellen Kusher coined the term to describe writing that dealt with the other end of a steampunk-era world—the mannerisms and customs of the fantasy Victorian society, particularly etiquette expectations during the Regency. What makes mannerpunk so fascinating is its ability to lean heavily into satire, as examining society rather than technology opens the door to critiquing the bigotry, sexism, and social hierarchy that was rampant in the Regency era. Still, mannerpunk approaches these subjects through a lens of entertainment, challenging social customs with hilarity and intrigue. What novels fall under this umbrella?

Gail Carriger’s series of novels ‘Soulless,’ ‘Blameless,’ ‘Changeless’, ‘Heartless,’ and ‘Timeless’ all take a refreshing look at the social sphere of Victorian London. Naomi Novik’s books, including ‘Uprooted’ and ‘Spinning Silver’, are all a part of an epic mannerpunk series that explores eras of war and social tension (from the backs of dragons). Fortunately, more writers are releasing novels in this genre than ever, so keeping your eyes peeled for future mannerpunk books may help you stay ahead of the curve on this genre’s mystical new releases.

Memoirs aren’t a new genre; since the beginning of time, plenty of authors have written about the nitty-gritty and amusement of real life. Some insightful memoirs take on a comedic tune, such as those from Nowhere’s owner Jenny Lawson in ‘Furiously Happy’ and ‘Let’s Pretend This Never Happened.’ Others use a serious tone to examine micro-moments in a larger timeline of life-altering events, such as Jeanette Walls in ‘The Glass Castle’ and Susanna Kaysen in ‘Girl, Interrupted’ (1993). However, one type of memoir is so uber specific that only a limited group of people can hope to write them: Oxbridge memoirs.

Oxbridge memoirs are written by people who attended or taught at Oxford or Cambridge in Europe, or were otherwise influenced by these universities. Some of these memoirs are about experiences at these universities, while others may simply illuminate how Oxford and/or Cambridge contributed to the development of their lives (Tara Westover’s gripping memoir ‘Educated’ mentions how her Cambridge studies affected her family relationships and perspectives on learning). Considering the notorious names that have graduated from these universities, including Lewis Carroll and Philip Pullman, it’s not altogether surprising that memoirs charting their paths to achievement exist. For those of us who stuck to universities in the U.S., these memoirs might be the closest thing we can get to understanding the elite colleges across the pond.